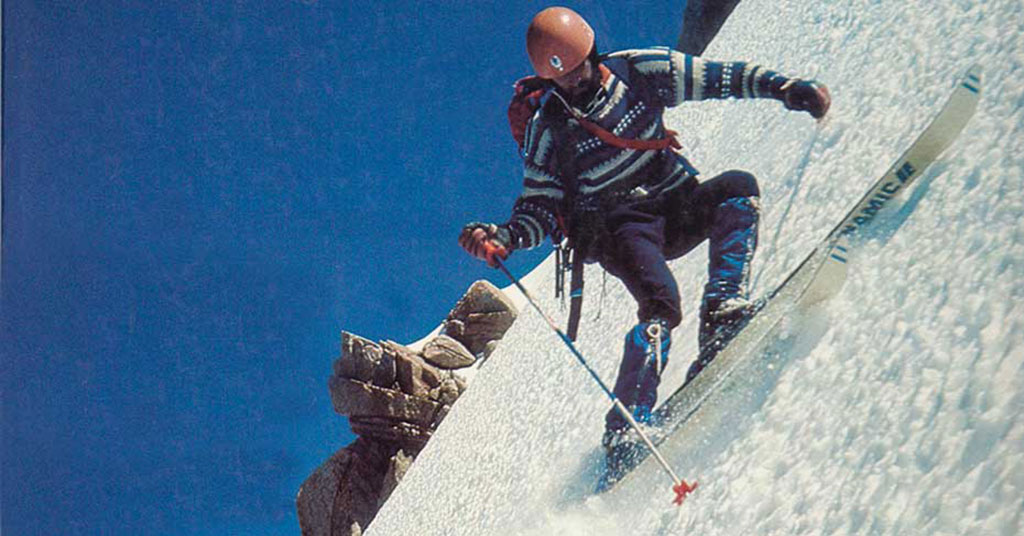 One of my technique goals this year has been to teach myself how to do Anselme Baud's steep turn (this would be one of the two variants of the original or classic pedal turn, as done by the only surviving co-creator, which is of course Baud himself).

Baud explicitly demonstrates his turn in the Bill Kerig film The Edge of Never, and you'd think that primer (plus a vast personal library of vintage Baud footage) would be enough for a steep-obsessed technician like myself to easily puzzle out how his turn works. Not so.

In large part, I remain baffled by Baud's technique. I can't replicate it to my own satisfaction. This is particularly vexing because his turn is, de facto, the foundation of the pedal turn, which sort of implies I can't do that, either. But it gets worse:

The exact sequence of motions that Baud appears to use (and that others relate in describing Baud's turn) strikes me as logically impossible—or at least, mechanically ill-advised (in particular: Baud's apparent weighting of the uphill ski).

This places me in a position not unlike the engineer who tried to argue Bumblebees can't fly. Obviously, Baud's turn works for Baud, and as he executes it, it is most certainly a thing of beauty—formidable and utterly functional.

Puzzling over this considerable conundrum, I find myself leaning toward two mutually-exclusive explanations:

(1) Baud's uphill leg stomp is a red herring; he's actually executing his turn off his downhill leg, just like I do --or-- (2) Baud's an artist, and his sequence of push-pull off that uphill leg is like hitting a major league fastball—even with years of practice, most of us will never master it.

I have good evidence in favor of both possibilities.

On point one, in the very same sequence where Baud demonstrates his turn, he goes on to make a series of turns, and if you look carefully, one of them is done without the uphill stomp. He just extends his lower leg, allows his upper body to flow out over the ski, and then snaps his legs up and around in a nifty, coordinated motion that's textbook Andy: "Outrigger Position".

This, to my eye, is also the technique that Patrick Vallencant used (the other co-creator of the Pedal Turn).

But point two remains: how do I account for what Baud is doing during his technique demonstration—or for the canonical description of the classic Pedal Turn?

Well...I don't have a good explanation. Baud, in his book, says something like "Support on the two sticks is essential." Meaning, he uses his poles as part of the actual turn to support at least some body weight during the turn's most critical phase (that push-pull, or apparent push-pull, off the uphill leg).

Baffling. Utterly baffling. Without a plane ticket to Chamonix, I have a feeling this one's going to continue to elude me.

Nice video Milo. I think what's happening is a combination of technique & Jedi mind trick. Anselme needs to get the downhill ski out of the way for the super short radius turn, but can't give up the security of the downhill ski until balance transfers to the uphill ski. The stomp is the mind trick. First he sets the uphill ski with a stomp, then flexes the downhill leg completely off the snow. What you can't see is he is probably tipping the heck out of his new free foot to make the arc. I'm climbing the steeps technique ladder myself, Andy. Last trip to Mammoth I lived on the top of the mountain. Got my first carved turns with edge hold, day 3 on the Cornice. Lots of tipping & eating my knees for lunch. :-)

Watch a YouTube video of remy steep skiing in which, in French, demonstrates the turn.

He pushes off the uphill ski and at the same time lifts and pivots the downhill.it's a very simple motion, and it's the same one deslaurier is describing. It really works.

Hey rod, asking seriously here: by any chance do you have video of yourself making a classic pedal turn? I'd be interested in seeing it...

Sorry,I don't. I learned it years ago at asi, from anselme baud himself, he taught a ski mountaineering course with bela.

Here's a vid of Patrick I found. Probably a more classic version of the pedal turn than you are describing, but I think it makes a very good case for weighting the uphill ski.

Guys at long last, I believe I have solved this mystery. I can now make Anselme's turn, and I understand what he is doing, and why I was having so much trouble doing it. I also understand (and more importantly, can explain) why some people have trouble with this, while to others it feels natural and intuitive. Yes, I think he is putting weight on the uphill ski--but how he is doing it is the key.

Will write more next week...

A number of years ago I subscribed to Couloir Magazine. In one of the issues there was a feature on the pedal hop turn with sequential photos. The idea of lifting the downhill ski and rotating it so that it is parallel to the fall line (3rd photo) seemed foreign and counter-intuitive to me then and now. See link to article below. The article also has a video of Patrick Vallencant demonstrating the turn.

Remy Lecluse (RIP) demonstrates his technique for skiing the steeps in Chamonix. See link to video below. Note the use of long cross country ski poles that he uses to keep himself in a more upright stance.

A rough translation of the French is found at the end of the comments section: See 3:17 to 3:20

“Longer poles (easier skinning up, allows you to stand taller on the steeps), plant both poles, 4 points of contact important to feel condition of the snow and always stay in contact. Uphill pole plant near ski tip, hips and shoulders ALWAYS in the fall line (avoids jumping, speed leading to loss of control). In balance with poles planted, majority of weight on downhill ski, if very steep legs converge, transfer weight from downhill to uphill ski, extend which initiates turn... et voila.”

Another skier, Dave Rosenbarger (RIP), skiing the Couloir Chere in Chamonix in a very relaxed and fluid manner in the video below. He uses conventional length ski poles and seems to plant the pole just in front of his downhill boot rather than down the hill. Since the slope is steep (50 degrees) it seems that he drops more than 6 vertical feet at the end of his turns. Dave is wearing the yellow and green jacket in the video and his technique is featured in the 1:18 to 1:51 portion.

After studying this since SD first introduced the topic like 3 years ago (still the most replied to subject I think) I'm still seeing a refinement between the classic PHT and what Lecluse, Rosenbarger, Plake and others are doing , skills I seek to copy. Watching Lecluse frame by frame to my eye shows a mitigated to almost non existent sequential leg lift depending on the turn and conditions. Certainly muted from what PV, et. al. seem to be doing, genius and pioneering though it was. Watching Peterson and Pehota (RIP to all the fallen) or Blizzard of Ahhhs footage is both amusing (wisdom of hindsight), awesome, and instructive. Basically the old skis sucked, you sunk deeper into the snow and arching turns on steep was just harder, I know cause those skis were "state of the art" when I started. Even looking at old Jackson Hole Air Force footage or Doug Coombs killing the free ski comp circa 92 in AK, reveals old fashioned hard work ,and serious skill sets despite ski quality. For a laugh look at Jean-Claude Killy or Billy Kidd running gates, AWKWARD, and these were THE guys back in the day. The modern masters to my eye seem more graceful, efficient, elegant. I see chest down hill, downhill pole plant (single or double, regular or long), a cautious heal lift/tip drop to new downhill ski with an early arced edge set, and a strong opposite hand drive "around the corner" (aka no backseat)at turns end (a personal must for me). And when you think about it, we all used to employ more inside leg lift (low angle PHT?) to initiate turns on easier slopes than we need to now. I'm hoping Andy can piece all the sage posts and his personal experience together into the definitive treatise on this deserving topic.

Andy-As a "veteran" of the pedal turn era hopefully I can shed some more light on this ugly yet beautiful technique. The element I did not see mentioned was the "hi mom" technique which was integral to the pedal turn especially in heavy, wet snow. The hi mom technique involved raising your outside hand as if you were waving to your mom as you initiated the pedal turn. This accelerated the unweighting and allowed the turn to happen quickly but without grace although there was a fluidity in the turn that was fun to watch back in that era.

So you are wondering where the term "hi mom" came from? My best answer is that it originated with some of the 80's Backcountry skiers in Summit County around Breckenridge and Copper, most of whom were ripping up the BC on Silverettas, GS skis or Kastle Tour Randonees, Montana skins, various alpine boots and some of the early Randonee boots from Dachstein (rear entry) and I believe Dynafit may have had a late 80s boot that struggled to push the heavy skis of the day. But this motley group refused to wear the neon popular at the time as Friends don't let Friends wear Neon!