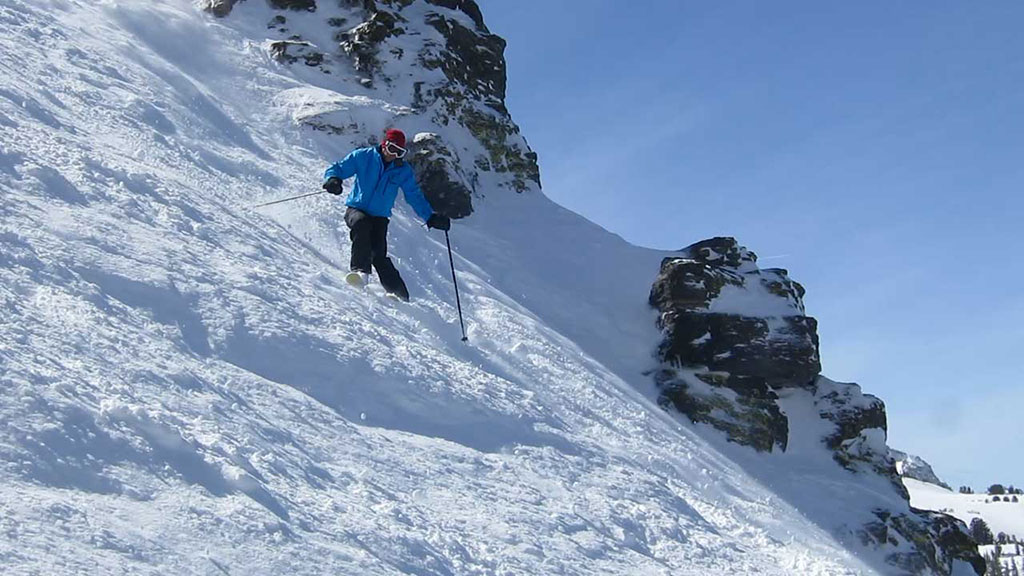 In their 2001 article, The New Pedal Carve Turn, brothers Rob and Eric DesLauriers attempt a detailed explanation of the mechanics of the pedal turn, plus three exercises designed to allow expert skiers to teach themselves the technique.

Despite the elegance and clarity of the DesLauriers' description, however, I was never able to put their theory into actual practice. Like Anselme Baud's attempt to demonstrate and teach his own variant of the pedal turn (in the Bill Kerig film, Edge of Never), the DesLauriers article baffled rather than enlightened me.

Obviously the pedal turn works. The question is why it remains so elusive to many good skiers, myself included.

I have been puzzling over that conundrum for several years now. Initially I thought I'd found a key error in the standard description of the turn's mechanics: that the apparent weighting of the uphill ski was in fact an illusion.

But subsequent years of putting my ideas into practice left me with a steep technique that, while viable, came up wanting, particularly in difficult snow. This left me convinced there was some key aspect of the turn that I was missing, and that all other descriptions of the technique, even Baud's himself, were failing to articulate.

One of the really, really interesting (and fun!) parts of my present ski life is that I get to spend a lot of time skiing with my kids. I have now watched the two of them evolve from tiny beings who could barely stand, with or without skis, into confident young rippers who are now trying to challenge the steeps.

And guess what: both of them get hung up on exactly the same technical challenge that vexes me—managing the transition from downhill to uphill ski. Or, more specifically, managing the weight shift from the old downhill ski to the new downhill ski during the critical, exposed, transition phase of the turn.

You don't need to watch my kids to see this in action: just board Mammoth's Chair 23 and watch people try to ski down the Dropout and Wipeout chutes. You will see, over and over, the same drama. Beginners, intermediates, and even many expert skiers get hung up trying to figure out when to shift to the uphill ski—and when they do shift, they tend to get stuck on it.

In one of my many previous articles I once noted, in exasperation, that there was an obvious solution to the problem of the steep turn: we just needed to find some way to pause gravity for a moment in the middle of the turn.

That thought has stuck with me. In truth, you can do a lot to momentarily pause gravity by rebounding off your downhill ski...but the obvious solution, if you really want to go zero-g in the middle of your turn, is to weight your uphill leg.

Which brings us back to the DesLauriers article. On truly steep pitches—not merely expert-level ski runs—all my attempts to weight the uphill ski ala the DesLauriers' exercises ended in failure. That led me to abandon the technique, as mentioned. But the Prodigal Son has returned.

I think I now understand what was missing.

The light bulb went off as I was watching Ski Peru. Peter Chrzanowski's classic film (which I highly recommend) features the first ski descent of Huascaran, Peru's highest peak, staring no less than Patrick Vallencant & Jean Marc Boivin. In it, you get a virtual feast of pedal turns.

Normally, steep skiing is shot across the hill, to emphasize steepness, but in Ski Peru, the camera operator shoots straight up and down. This allowed me to see something I'd never noticed before: as the French masters initiate their turns, they shift their center of mass forward. It's a subtle move, but once you look for it, it's unmistakable.

Imagine you are walking and there's a 6" step stool in your way.

Instead of swerving around the step stool, imagine stepping onto and then not so much over as through the step stool. For clarity, let's call the leg that steps onto the step stool your "uphill" leg. And note that it remains bent: you're not stepping up-and-over. Here is your pedal turn weight transfer, executed to perfection: step onto and through your uphill leg, no hop necessary.

Let's take this even further: step onto the step stool, and as you feel your weight passing "through", pivot 180 degrees on that uphill leg and go back the other way. Add a dash of heel flexion. There's your pedal turn, executed to perfection!

Now, to understand what's missing in the DesLauriers' description, and why so many skiers have so much trouble with this motion, let's break the turn:

Go back to your step stool. Try doing the same thing, but this time, do it before you center of mass passes "through". As a metaphorical image, you might think of this as trying to execute the turn on the "high" side. As a physical reality, if you're anything like me, it will feel like gravity is giving you a big stiff-arm, literally pushing you backwards, denying the turn.

Imagine doing that incomplete turn—or rather, trying to do it—on skis, on snow, instead of just on a step stool. That's what it feels like to get stuck on your uphill ski. I suspect many of us already know the sensation quite well.

It's not quite this simple, of course. There are other coordinating motions which must be learned and made in the proper sequence. To further muddy the waters, if I'm reading Anselme's technique correctly, he sometimes does execute turns on the "high" side, via a sort of hybrid corkscrew-back scratcher motion that I think I can live without mastering.

But this onto-and-through concept really seems to point the way to a successful pedal turn, at least for me. I'll continue experimenting with it. I'm particularly interested in seeing if I can put these ideas to work in difficult snow, and in exposed places. And if you find anything here useful in your own skiing (or not), please let me know...

looks like we might get some snow between 10th and 20th? El nino hasn't forget the southland? What do you think Andy? I like the way you describe zero gravity of turns in this article.

Mammoth is doing OK; SoCal mtns are probably a bust unless you get above 9K or so. Hearing rumors of colder storms coming but that may be wishful thinking. We haven't had a cold storm this entire winter. But sure hoping for a July close for Mammoth--that would be a treat.

I've really learned a lot watching my kids ski. You can see exactly the sticky point I'm taking about, and you can see the improvisations they develop to try to cope with it. These same patterns appear virtually universally in intermediate and even advanced skiers. If I get my act together I'll do a video series demonstrating them.

When you get the mechanics right, it does feel exactly like zero g. When you hit that feeling, you know you've got it. :)