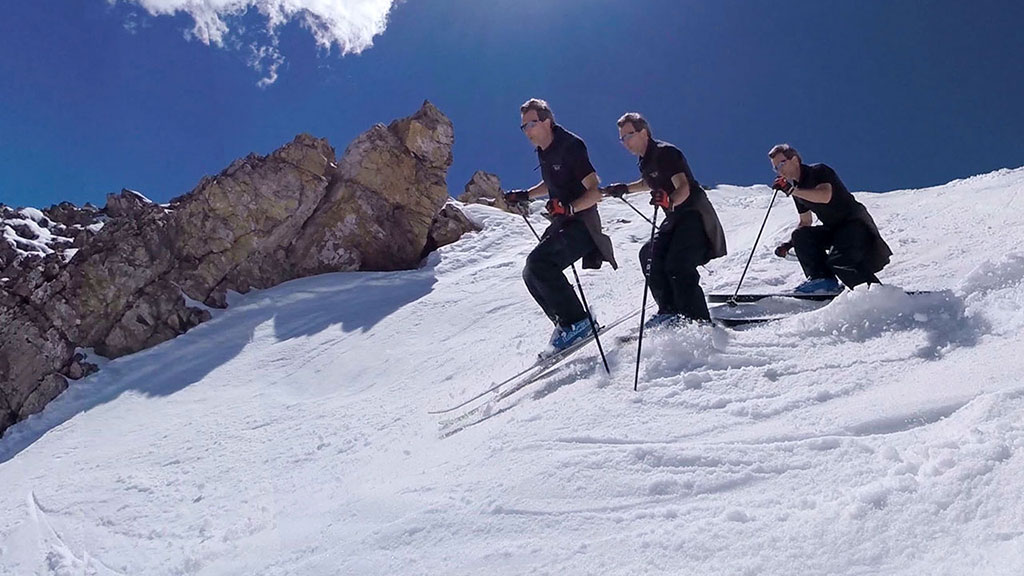 It is interesting, looking at video of myself from this past weekend, how similar my technique looks to earlier footage...yet how different it feels to me now. I am doing some very subtle things very slightly differently, and it feels fantastic. But the difference, in terms of raw technique, is ever-so-close to the turns I've always been making.

I wish I could say I know exactly what I'm doing now, and more importantly I wish I could explain what I'm doing, but I can't. Instead, I'm going to write a very tentative post summing up what I think are the key ingredients of a successful (ie, efficient and elegant) pedal turn, plus some pitfalls to avoid.

Bottom line: I think I understand this turn now. But I'm not 100% sure.

Let's roll tape from 2012: check out Trevor Benedict and me skiing Levitt Peak's Y Couloir. What should leap out at you, right away, is how much fun we used to have skiing the Sierra backcountry and making music videos of it. Good times! What the heck happened? Other than kids, aging, and an epic 4-year drought, I really have no idea...

Anyhow, on Levitt Peak I was using what I thought was state-of-the-art Pedal technique: I was transferring my weight to my uphill ski, then leaping upward off that ski and pivoting around to make the turn. I thought that was how the masters did it...until I watched the footage of Trevor skiing the very same line. Whatever he was doing, it looked a hell of a lot more fluid and controlled and heck just pretty than what I was doing, and I became obsessed with figuring out how to do it myself, if for no other reason than I hate being outshined on YouTube by my skiing partners.

So, four years later, I now think I can make that turn. Maybe not quite as elegantly as Trevor or Patrick Vallencant, but heck I've got kind of a thin and spindly figure, plus I'm a little knock-kneed, so cut me some slack.

In executing a steep turn what you are trying to do is move from (old) downhill leg to (new) downhill leg, and in between, there is this little problem called gravity. If you could strap on a harness, and clip in to a bungee line anchored directly above your head, making the pivot from leg to leg would be trivial because, in that moment of transition, gravity wouldn't pull you downward.

This is a really critical concept to understand: steep skiers need to find some means of cheating gravity in that crucial ephemeral moment that exists between the start and end of a turn across the hill.

Why was I jumping off my uphill ski in that Levitt Peak video? To try to create that antigravity.

Why were the results less than satisfactory? Because antigravity, like all superpowers, has its own Kryptonite.

I have written about the uphill leg in the past. Boy, have I written about it. It seems so obvious that the uphill ski is the solution to the antigravity problem. You've got to get off your downhill leg. The uphill leg just happens to be right next to it, standing relaxed and easy, unemployed, as it were, happy to pitch in and help. Why not get on that uphill ski and stomp out a turn off it?

It turns out doing that creates a whole lot of problems. It wrecks your body position. It jams the uphill ski into the snow, glueing it in place and making it much more likely to stick rather than (as needed) freely pivot. It's also terribly inefficient, because the uphill leg is in a deeply-flexed, mechanically-weak position.

But...in the right dose, the uphill leg is indeed the answer to a steep skier's need for antigravity.

The right dose might best be defined as "as little as possible." Use the uphill leg, just like your imaginary bungee top rope, for just the exact amount of force you need to hold your body in place while you make your deft/decisive pivot.

UPDATE: I'm going to add that not only how much, but also when, and for how long, you shift weight to the uphill leg seems very important. There is a timing issue here; earlier in the turn sequence is probably better (but not before initiation?). Or maybe better to say: not too late!

In preparing for a steep turn, I find it helpful to get really forward over my uphill leg. I put a lot of flex in that uphill leg, and start working my upper body forward and over it. Simultaneously, in this pre-initiation phase, I am extending my lower leg forcefully down the hill, which allows my body to lean outward as well (I call this "outrigger" position because the extended lower leg acts like a stabilizer).

Right before I initiate the turn, making sure I'm forward over that uphill leg, I'll (briefly) shift (some) weight to the uphill leg. You can do this by just rocking your body forward (forward!) which automatically loads the uphill ski.

Then I initiate the turn by quickly and decisively lifting my downhill ski. Not tip-up; but rather, heel-up. That's important.

If things are a little sticky with the uphill ski, or if my body position feels a little off, I may use my downhill pole to push a little, creating a little more antigravity. I do this as a sort of micro-adjustment when I'm skiing moguls, and it works for steep skiing as well (though perhaps not without some element of risk).

On the subject of pole plant, normally we plant our poles forward, but for steep turns try planting that downhill pole more toward the back of your ski to help open up your body--sort of like trying to plant the pole behind you.

This rotates your hips, opening them toward the fall line, as if you're trying to...uh...point your gonads directly down the fall line. This rotation has a nifty effect on the whole turn, and might be an alternative to getting as far forward on the uphill leg in the pre-initiation/preparation phase.

Looking at video of myself, I can see that my body is rising, somewhat, in the middle of the turn, but I don't think it's happening as result of an active knee extension (a forceful push!), but rather as a result of hip, thigh, or back extension—or some combination. This is important, because the uphill leg needs to flex (that heel-lift motion), just like the downhill ski at initiation, when the pivot across the fall line happens.

In (hopefully) simpler words, if you try to push off your uphill leg, you find yourself at odds with the (simultaneous) need to flex the uphill leg to lift the ski tail. Or: you can't push and pull at the same time, so don't!

UPDATE: Yes to using your thigh muscles, and thinking of this motion as happening at the thigh rather than the knee (uphill leg). I also have a mental image of raising my knees at this phase of the turn (may or may not be accurate). I also like to imagine ESPN's Chris Berman saying "Whoop!" as I make that heel lift/pivot, because that's exactly how it feels. Quick and light, like you're juking gravity.

UPDATE: Maybe another way to frame all of this is that you position your upper body into a properly anticipatory stance, then raise yourself by lifting the downhill leg while moving forward onto the uphill leg, and then rotate your body off that uphill leg—sort of forward and into space—while the skis pivot and/or flip beneath you.

As you might imagine, I'm having trouble communicating these ideas to my son, and getting him to make the same turn. But, I'm hopeful because he has the same technique that I used to have (getting stuck on the uphill ski, trying to create antigravity by "jumping"), so I know exactly what he's doing wrong, even if I can't quite articulate it. I'm betting as soon as I figure out how to explain it to him in a way that clicks, I'll know how to explain it, period.

It has been an awesome ski season for me and my family, even though very little backcountry was involved this year, and I think this is going to wrap it up for this season. Thanks to everyone for tuning in! Now we just have to get through summer...

Here's a sweet article rerun from 1978 about steeps!

Is there anyone out there that has done San jacinto peak via "Hurkey creek?"

Happy October were almost there!

Joe I know people have done it from Idyllwild. I think it's pretty straightforward in that direction, but things do tend to melt out quicker on that side of the mountain. I do feel a chill in the air... :)

Andy, can you recommend a good steep spot at Mammoth to practice pedal-hop turns? Thanks!

When it fills in, the cliff/headwall between Cornice Bowl and Hangman's is unbeatable--a sustained 45-50° pitch. Otherwise, both Dropout and Wipeout are steep enough at the top to work on pedal technique.