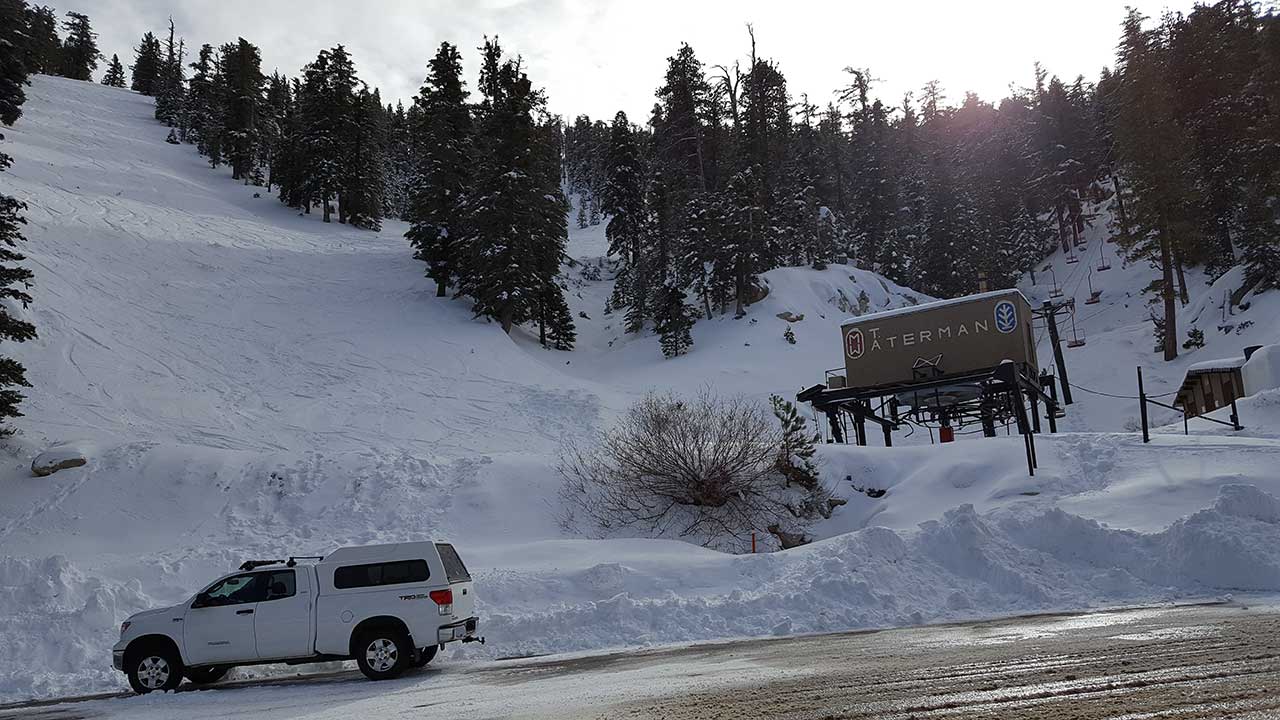 Snow, snow, and more snow. Al and I wound our way up the 2 on Saturday during the mid-storm break to check out Mount Waterman. We skinned up for an easy run down the face, and packed up as the clouds started building for Sunday's mega-storm.

Pre-Sunday, we found a base of let's say 15-20" of thick and rapidly consolidating powder. That's in the 7K range in the San Gabriels. Up high currently who really knows how much is out there? Mammoth shut down all operations yesterday due to the intensity of the storm. Most of the local areas were either closed or closing, if you could get to them, which you couldn't.

Now might be a good time to point out that we do have a local avalanche center which is releasing reasonably timely bulletins. Check that here. Note also that Southern California is statistically over-represented when it comes to avalanche fatalities in the state of California.

It can be dangerous out there.

Typically our avalanche danger falls into one of three categories. The first is simply large-scale hazard due to massive snowfall in compressed timeframes. Cat two is possibly the more dangerous one: weird creepy things that happen to the snowpack during particularly energetic storms due to orographic lifting (translation: basin thunderstorms collide with the mountains, often producing graupel/pellets which is then buried beneath subsequent heavier snowfall).

Our snowpack is typically not reactive, but when conditions are right, watch out. Things can be supremely touchy.

Cat three is the one we're all most familiar with: rapid warming creating wet slide hazard. We do live in Southern California, after all.

The good news is that avalanche danger in the SoCal mountains typically resolves quickly after storms. Reactivity plummets as temperatures return to normal, though of course that means wet slides become possible. I'll except the big north faces—Baldy, Jacinto, Gorgonio—from this rule. Watch for persistent danger there even well after fresh snowfall.

Any discussion of threats to SoCal skiers has got to include road hazard, which can be considerable in the storms. It hurts me just as much as it hurts you, but sometimes the sanest choice is indeed to just stay home until everything has calmed down. This is especially applicable for those of you coming from other mountain regions not used to seeing 5-7 feet of snow fall in one pop.

After years of drought, we are finally seeing a return to the real capabilities of big Pacific storms. Give them your utmost respect.

Thanks for the post! Hoping to check out ether Waterman or Baldy Ski areas this coming weekend. Any suggestions for which one may be the most fun?

i think we prayed too much! Heading out mañana, hoping things will be settled more. Resorts don't look too bad right now either Best of luck Andy.

Waterman is supposed to open up this weekend, so that could be a lot of fun (it doesn't happen that often). Baldy if they get all the lifts running should be very good. I'd go there.