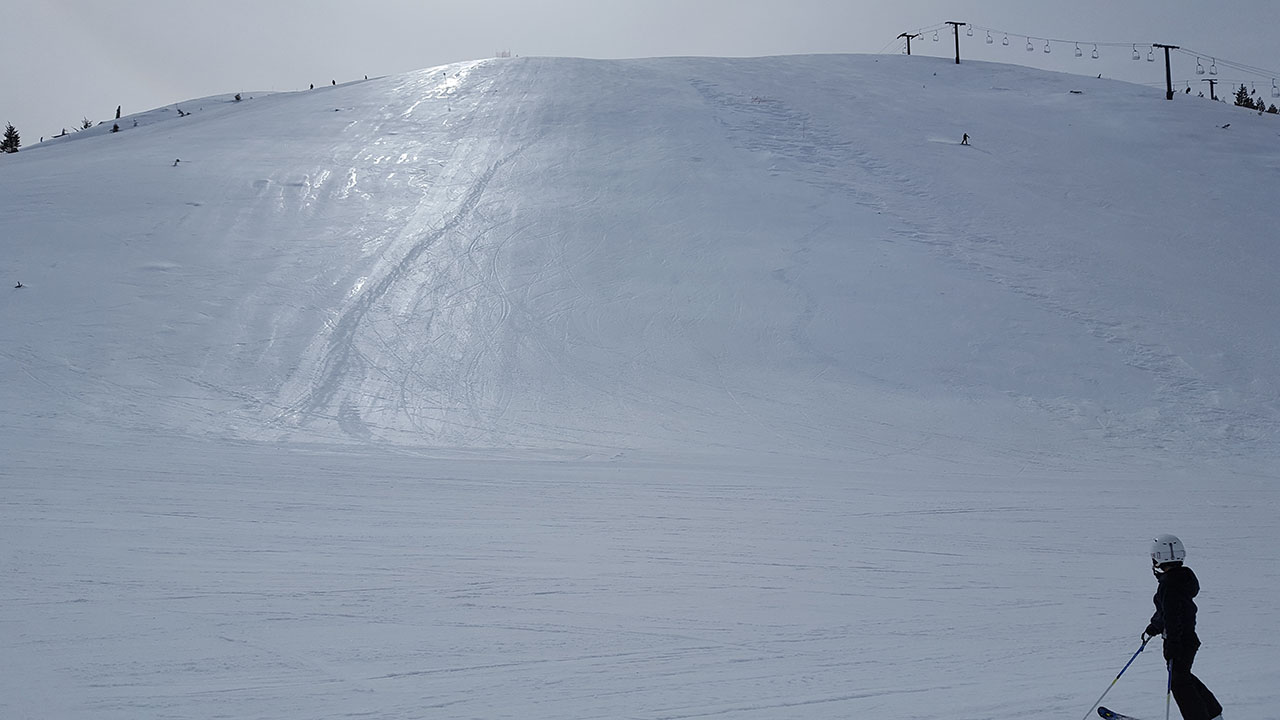 2017. Whatever you were expecting, I doubt this was it. Took the kids to Snow Valley this past weekend. Slide Peak is open, and that does tip Snow Valley into a genuinely interesting place to ski, albeit one with absolutely atrocious lift service (UPDATE: SV says they will have a high speed lift running for the winter of 17/18).

Snow Valley drives me crazy. Every time I drive past, on my way to Snow Summit, I find myself mentally calculating how much extra time I'm wasting getting all the way to Big Bear Lake. Why not ski now, here? my little voice asks me.

And the parking lot—how I love Snow Valley's parking lot. Compare that to the disaster that is trying to park at Snow Summit on a weekend morning, and killing that extra 90 minutes, give or take, seems indeed like madness.

But then there are the chairlifts, and the dismal reality that you get much, much less actual skiing at SV, and much, much more lift riding.

Snow levels have been high the past few storms, and this seems likely to continue as a theme for our wet-n-warm 2017 winter. Rain has been working its dark magic on snowpack throughout Southern California, meaning ice is no longer a theoretical risk, it's an omnipresent hazard out there.

For backcountry riders in particular, be aware that saturated and frozen snow may look just like ordinary snow, but it's not. Your Alpine edges would struggle to bite into it, and your touring gear won't have a chance, especially on the big north faces.

Up north, Mammoth seems about ready to cry Uncle. Read poor Howard's latest and you'll quickly get the picture: an exhausted, snowed-out town trying to dig out from last week's storm even as this week's continues to hammer them. And next week's storm yet to come.

Snow, and storms in fact shut down this year's WWSRA event at Mammoth, which was cancelled as I was en route on Tuesday.

Now what? It's OK to stay home. That's what I tell myself. I am trying to combat my snow-is-out-there-get-it-now! compulsions, with mixed success. But sometimes discretion is indeed the better part of valor.

Having just experienced a 90 minute traffic jam between Summit and SV, we plan on going to SV on Prez Day Monday. Haven't skied there in 35 years. Is it that lifts are slow or is it long lift lines? As a Baldy regular, slow lifts don't scare me.

Bill lift lines typically aren't much of a problem at SV, it's that the lifts are very slow, and they tend to stop a lot, making for very long rides up. That weekend traffic leaving BBL is out of control. We got stuck in it too. My total drive time was close to a Mammoth trip. :(

Think you'll get any substantial ski-mountaineering chances on the East-side this year? No pressure though.

That being said I've missed your trip reports. You're a skilled writer and your website has been my go to for years. I've re-read all of your reports AT LEAST 5 times each.

Joseph, I'm training up, watching the weather very carefully for breaks, and hoping for a calmer spring/late spring. Fingers crossed...

I'm looking at Langley in late April, or maybe a longer tour into the interior.

The list is getting alarmingly long right now. I need to get back to Langley, too. Need to somehow morph into an immortal climbing superman with no schedule constraints before March begins!

Pretty much always get rewarded by driving a tad further for Summit, but sometimes you gotta slum it and hit SV on those days ya just don't want to deal. And never too disappointed with apres at "the fireside".

I went to SV a few times this winter and had an absolute blast. They had 100 percent coverage. Took the kid up to slide peak and we hit all kinds of lines from east to west. I then did some runs on my own, messing around at the mid station on chair 9 and did those trees runs over and over.

Hands down SV rocks on a wednesday.