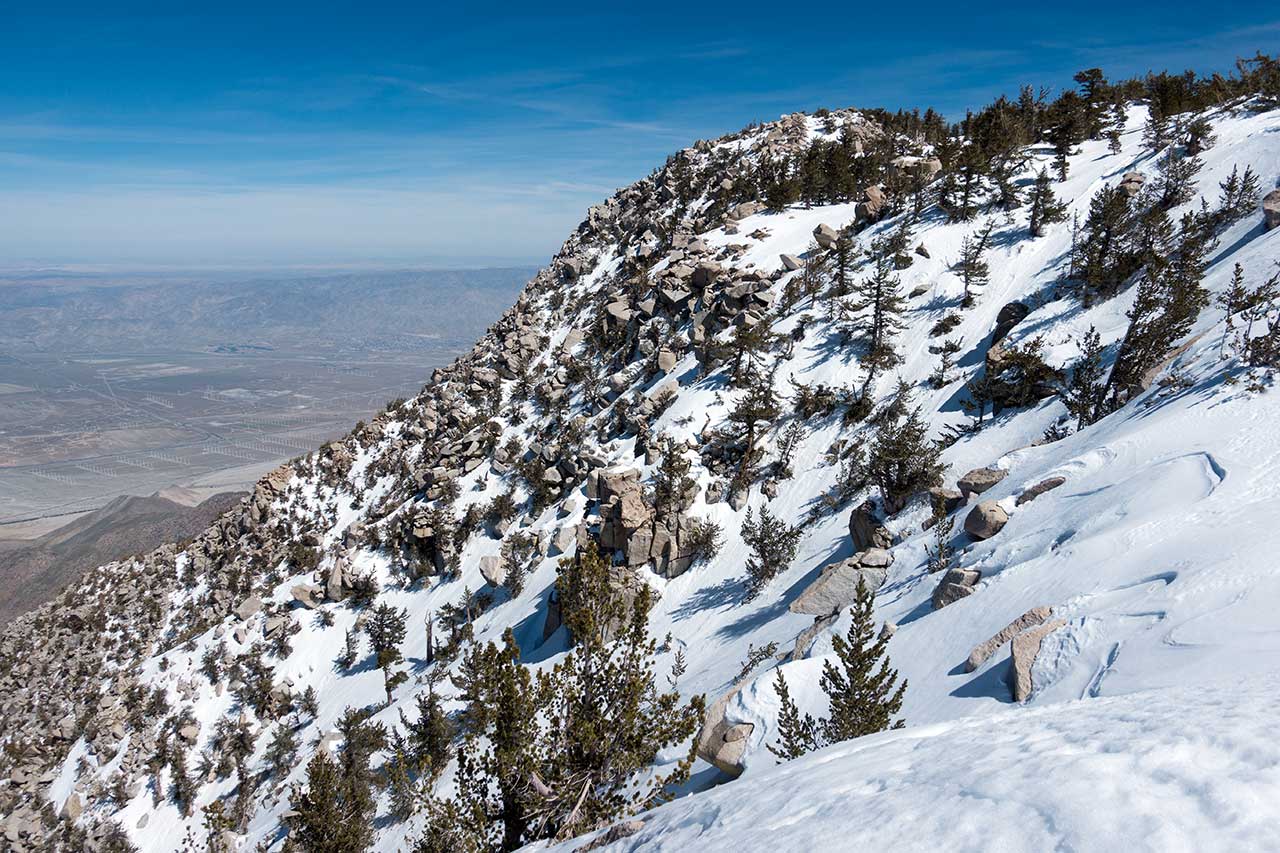 What do you do when the mountain says, 'I want to hurt you'? That was the question this past weekend, when Al and I scouted Folly Peak, for a planned but aborted ski descent of its north-northwest chutes.

Folly Peak is a striking sub-summit off the western shoulder of San Jacinto Peak, in the San Jacinto Mountains. Folly features several massive and complex aretes that plunge down toward the Palm Springs desert. To the south, the terrain is rocky and scrubby, too claustrophobic for good skiing. To the north, virtually everything off the summit is EX.

I was taken by surprise by this one. Google Earth didn't remotely capture the steepness nor exposure along Folly Peak's summit ridge. Moreover, despite mild temps, snow on the north facing headwalls remained wintery and icy, which pretty much made the decision to turn around a no-brainer.

There are a number of giant, classic slide paths running from northeast to northwest off Folly Peak.

Any of them would make for a spectacular ski descent—easily on par or even surpassing Snow Creek. Preferred exit would be climb back up Folly, then back up San Jacinto Peak, then ski/hike down to the tram. Alternately, it might be possible to connect to the Pacific Crest Trail to the west, but that obviously entails an even more-massive effort, plus the considerable threat of class 4 and 5 terrain complications.

Sun angle seems to be the key for this one.

Wait too long, and the snow will be gone (or for that matter, the snow on the lower gullies too soft and unstable). Go too soon, and you're going to need ropes and ice tools to safely get down and/or up that headwall safely.

Unlike the north facing aspects of Mount San Antonio, which gently (but deceptively!) roll off the summit, Folly Peak's north terrain practically screams danger in your face. Even with good snow, finding a decent passage through Folly's cliff bands and rocky headwall would be tricky. And, of course, the effort factor for a significant ski descent would be considerable.

Along with San Jacinto Peak's north face (Snow Creek), this is one of those areas you don't want to mess with unless everything (conditions, your equipment, your experience, your fitness level, the alignment of the stars) are exactly right.

Nice pic.
Anything left in the Angeles Crest? Seems even kratka is burned out!

I would try BP or Throop.