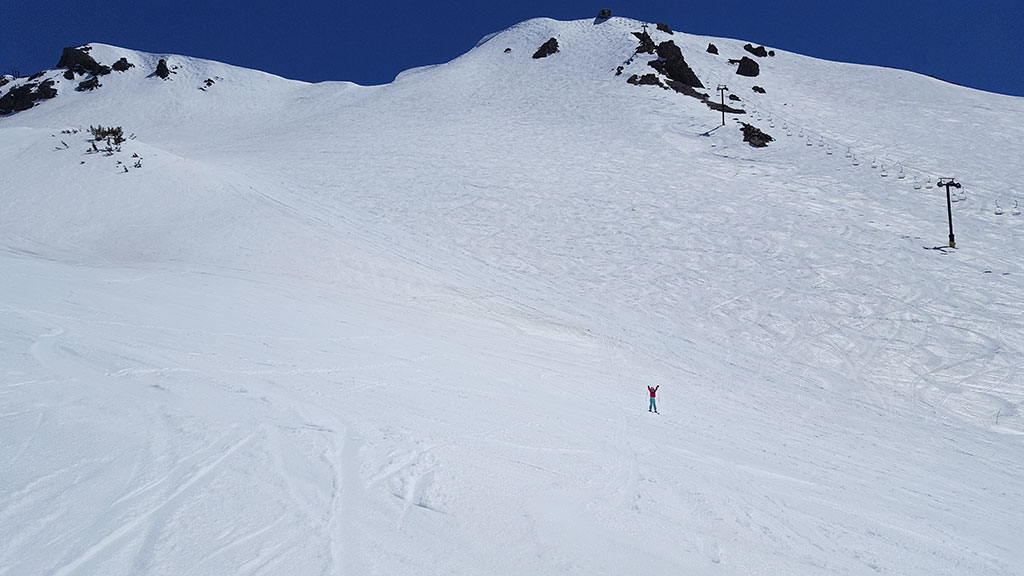 Mammoth in May is simply untouchable. There is no place on Earth I'd rather be. Give me the free-fall magic of Wipeout/Dropout in sun-kissed spring snow, lap after lap, till my legs quit—and then give me some more.

I had a feeling this Memorial Day weekend would be something very special, and it was. The weather could not have been better. In addition to an over-the-top abundance of snow, there was an equal abundance of sunshine. I hope you got your piece of both.

Winter may be over, but skiing far from. There could be fifty feet of snow underneath chair 23 right now. Mammoth is committing to running the lifts daily "into" August. August! And I very much doubt they'll run out of upper mountain snow even then.

As for the Sierra backcountry: good golly.

I say road access is generally excellent, with Tioga/Sonora the only exceptions. Use those high roads for snowpack access, unless you really like to suffer. Snow levels are high throughout the Southern Sierra, and getting higher with each heat wave.

Beware water crossings, and beware ice. Creeks and lakes may well be your cruxes for the remainder of the season. Pick your routes carefully, or you will get shut down on the wrong side of a raging river.

Ice and over-firm snow remain an issue on the big north faces, even on the warm days. Perhaps June will prove to be May for these lines and finally see them in good shape. Regardless, assess north faces carefully, especially the steep ones, and suck it up and quit your plan if they're not behaving themselves.

And now for the good news: there is still crazy amounts of snow to be found throughout the range, and up high it is remarkably free of suncups and texture. High altitude south, southeast, and east faces are positively glorious right now. Start early, aim to be up and done by noon, and take your pick of the best the Sierra has to offer.

Is that a joyful little Miss L, AKA "Rocket" (get it Miss-l!?) screaming down a vacant Gremlins? I hate you btw, my MD plans to MM vaporized so pretty jealous but grateful for May days I did get in. Still never skied in any official summer months yet so hoping to. Been thinking June BC would be the deal per cool May temps, good to hear confirmation. Enjoyed the awesome TR's this season. Is Russell east face a FD? I can't find any TR's for this route...hats off to you sir in either case!

That is she after her 1st successful descent of Dropout. Been a multi-year project. :) I am not aware of Russell's NE couloir having previously been skied, but in the Sierra, you just never know. You've got at least two more months for Mammoth, so get up there!

Really she did DO! Awesome, hats off to her and Dad/Coach! Your self instruction project paid off as well, super clean/safe high angle work. Yeah thinking a once in a life time for summer skiing, ain't getting any younger here. Besides normal climbing will have a short season above 12k I'd guess so forced to ski- darn.

Amazing! Glad I checked in, planning on skiing there around the 18th. August?? For real??? I'm just going to have to finally move back to California… thanks for the info!