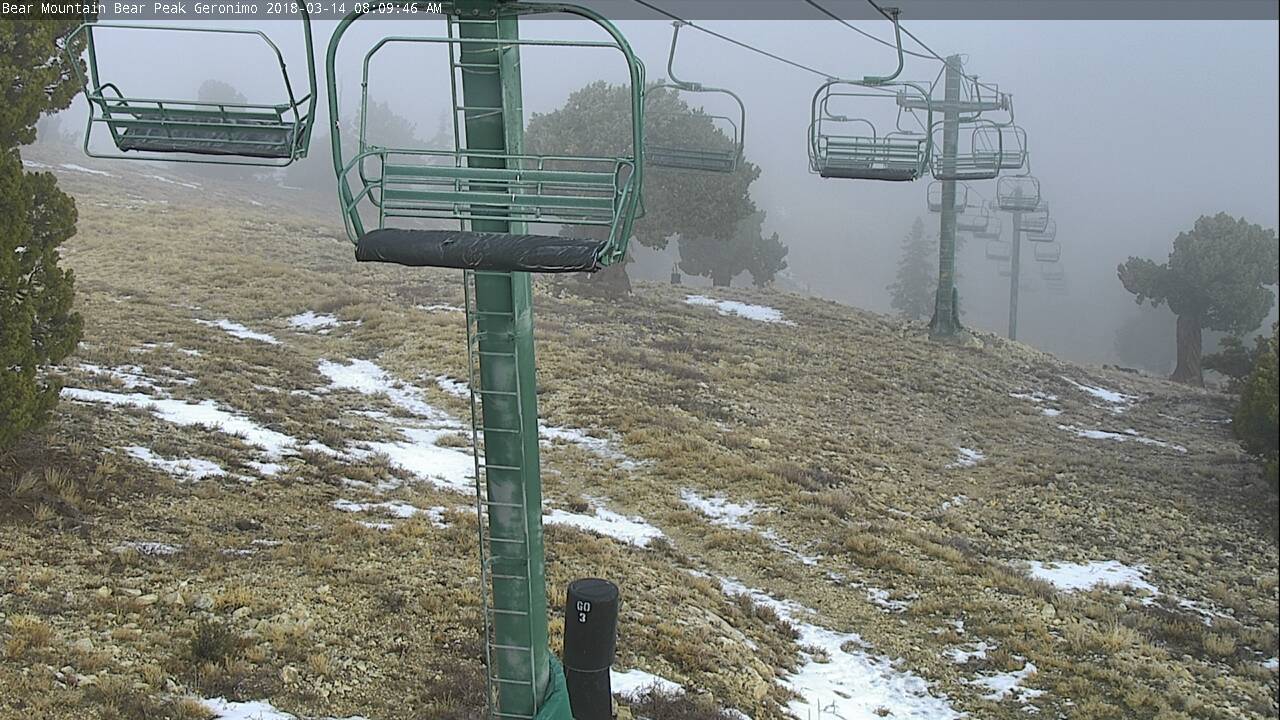 This is Bear Mountain's Bear Peak Cam, as of this morning, March 14, 2018, and...where the heck is the snow? Yes, March has finally shifted us from a dry to a reasonably wet pattern.

But these storms don't seem to be translating into snowfall in the local mountains—at least not at resort levels.

The local resorts, by the way, are an excellent source of information for estimating what's happening in the SoCal backcountry, via their web cams, their snow reports, and their twitter accounts. By piecing these together, you can get a very accurate picture of what's happening out there, which, for now, unfortunately doesn't look like very much.

Whatever happens, this March has brought enough Sierra precipitation to turnaround what was looking like a disastrously dry winter. Prior to the first storm cycle two weeks ago, much of the Sierra snowpack was at or below all-time worst levels.

Importantly, that precipitation is falling as snow across much of the central and northern Sierra, banking water for the major watersheds, and banking days for our upcoming Sierra Spring ski season.

I don't get the sense there's a lot of snow on our high peaks (Gorgonio, San Antonio, San Jacinto). I haven't felt motivated to hike out there to find out for sure. Looking at the forecast going forward, I again see only a few inches of accumulation on the high peaks. At least we're getting the rain.

UPDATE II: and one more thing—if "The Wall" is not open at Snow Summit, it means the storms aren't doing anything.

For me, one of the strongest indicators of the impact of global climate change is the impact it is having on Southern California skiing. My Dad tells me stories about skiing Waterman and Baldy when he was a teen and twenty something growing up in San Gabriel Valley (60’s and early 70’s). Today’s teens and twenty somethings just DO NOT have the same experience because the snow is just not there. Sigh ...

I keep thinking about that myself. Storms dropping 1-2 feet of new snow at resort level was not unusual. Persistent snow at the Baldy parking lot was not unusual. It's just totally different now. If the snow level is below 8K, that's a cold storm by today's standards.

I took a decent little tour up San Bernardino today after realizing that a tram ticket up San Jacinto looking for snow would be a waste of time and money.

I can report that there is certainly enough snow to ski back down almost to the parking lot in Angelus Pines, but not enough higher up to ride anywhere except back down the trail.

With some more interesting weather tomorrow and later this week, we'll see what fills in. But I fear it's too little, too late as nothing short of an additional 3-4 feet would make a difference for where I toured.

I hiked around San Gorgonio today. There was an inch/inch and a half of fresh in the morning at the Vivian Creek trailhead, but that melted by the end of the day. The accumulation up higher was a lot better, as it stayed cold throughout the day. The trails were were mostly covered with new snow after High Camp (9200). I was post holing up to my shin at 10,000, where I turned around.

I agree with Sean - I'd want to see another 3 to 4 feet before I tried to ski anything.

Thanks for the reports! I was hoping to hear there was more snow up high. Maybe the upcoming AR event will hit colder than forecast...

Here's hoping, Andy. I'll most likely be at Baldy this weekend, and from what I can tell the storm should hit there better than mountains further East. But who knows, still 5 days out and a lot can change. Fingers crossed

Wife just came home from a 1-29-18 hospitalization so I missed Saturday’s sweet little storm though my son was able to savor at SS. SS’s Bowl has been closed 3 of the last 4 years if memory serves, indeed unusual. However, as I wrote the resort after a previous Feb storm, there was enough base to blow snow over, still waiting for “excellent idea Mr Brown” reply. I think economics has partially played a role in recent bowl closures combined with a stingy Snow God. Indeed why did SS invest in such a massive system, ans: latitude 34, altitude 7,000’. In 87 the US Ski team practiced here cause it was bare elsewhere but usually they don’t have too. Snow fall varies year over year.

Just consider the following discussion before becoming to doomsdayish: we probably should accept that we live in a semi arid zone before/during/after the current climate spike. Dave McCoy didn’t select SS for a reason...MM gets buried, locally not so much. Mulloholand knew this as well, that’s why Mono lake looked like a salt marsh for all those years, So Cal is dry. Calif historically can be frightenly dry with droughts of 180 and 240 years in the last millennium, a couple of years is nothing. And take a look at MM snow fall history back to 69 when global cooling was the fear, massive variability hundreds of inches below and indeed above the 300” average-how soon we forget 2011....17? Or 97 when the Wall had 12-15’ base at season’s end forcing MM style mountain bike tunneling. MM history has had even drier years than recently, even below 100”, while we’re are now/were worried about being below 200”. Or weirdly enough, SoCal can be wet. Look up the great winter of 1862 where massive atmospheric rivers occurred long before the term AR did. From Wikipedia:

In Los Angeles County, (including what is now Orange County) the flooding Santa Ana River created an inland sea lasting about three weeks with water standing 4 feet (1.2 m) deep up to 4 miles (6 km) from the river.[15] In February 1862, the Los Angeles, San Gabriel, and Santa Ana Rivers merged. Government surveys at the time indicated that a solid expanse of water covered the area from Signal Hill to Huntington Beach, a distance of approximately 18 miles (29 km).[21]:38

The Central Valley that year was a Lake 300 x 20 miles, that phenomena was no secret to Native California’s but seemingly it is to us. The floods of 1938 led to the paving of the LA River. Just saying a little perspective may apply here, but to be sure let’s be good stewards of our planet as well.

That said this next storm due 3-20 could sadly wipe out SoCal resort base areas but could bury above 8K and potentially could lead to the coverages the scouts above seek. Pray it’s 5 deg cooler than predicted and we can unleash Andy’s considerable BC skills locally before the Sierra is shape, video and text to later be enjoyed from the safety of our slope side condos. My spidey sense says be safe out there until it consolidates.