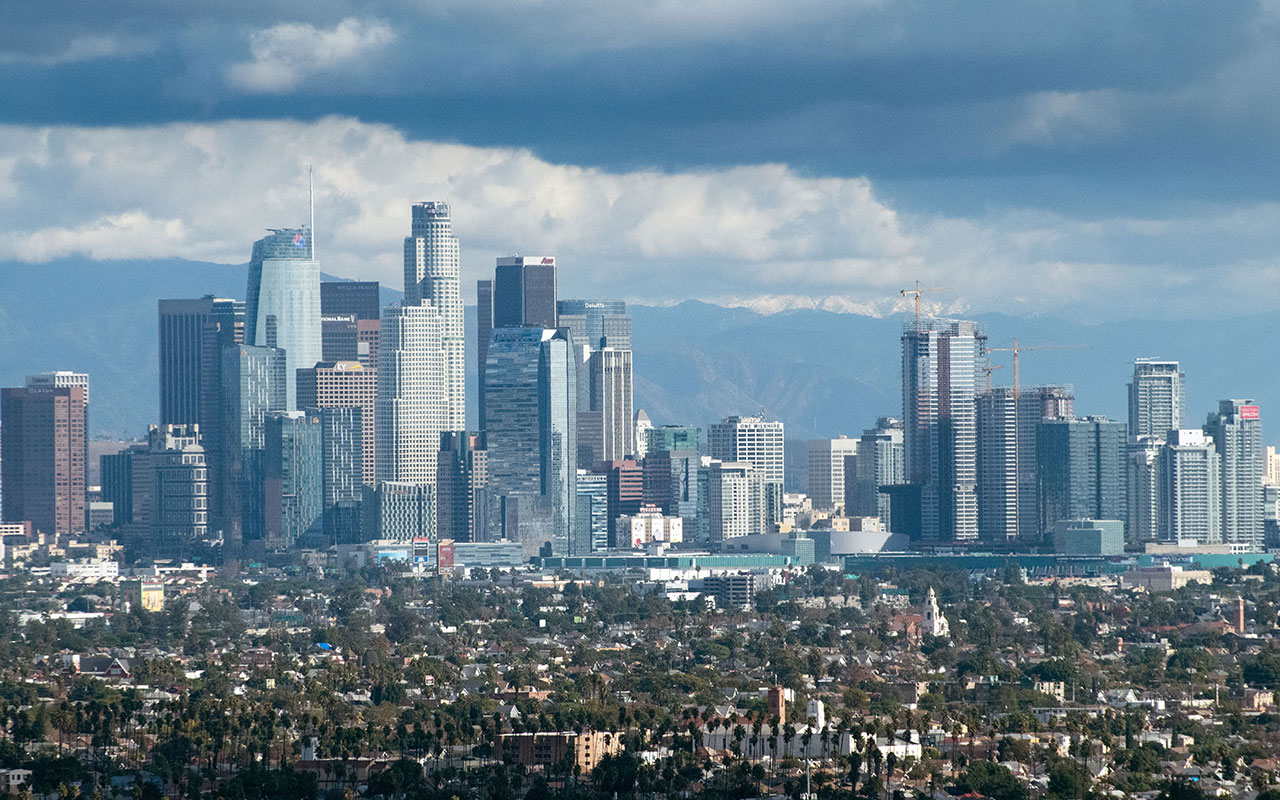 I tried I tried I tried to get some classic L.A. skyline-and-snow shots, but the clouds have just not been cooperating. There is snow out there, obviously, and a lot of it—maybe too much so.

The roads have been a disaster. Snow Valley's twitter feed has been equal parts delight (I think they're reporting up to five feet of new snow!) and dismay (you can't get there! Still!). Basically Big Bear has been inaccessible for days. I think they're currently allowing residents in (as of Sat morning 11/30) from the Lucerne Valley side with chains required on all vehicles.

Mountain High has been the most accessible of the local resorts, but you have to expect crowd craziness. Baldy gave up on today but is hopeful for tomorrow. Just be aware you may end up spending the night in your car if you go. When all the tallies are in, we expect many SoCal areas will have seen record November snowfall.

Are these kinds of deep lows pushing down through California going to be a regular part of our climate future? I think that's a really interesting question. The ocean interacts with our continental mass in a way that seems to favor the creation of that massive blocking high we all know and hate.

This is an avenue of study that climate scientists have recently become very interested in. We know what the past seven or so years look like: winter months dominated by that dreaded high pressure, intermixed with short but furious storm cycles. I would think, as we continue to trap more and more energy in our atmosphere, that tension will resolve, one way or another.

But which? I think chaos favors more intense storms pushing farther south...it's just a question as to whether those storms rip through SoCal, or are pushed down the Rockies through the continental interior.

Locally, your access points are the Tram, or roads you think might not be hopelessly clogged and/or blocked by law enforcement. It's been hard knowing all that snow is out there, and not being able to get to it, but having a belly full of turkey did at least make me a little more docile and there's always football on the TV.

Take seriously the possibility that conditions are unstable out there, including throughout the local mountains. This has been a cold, windy, and heavy snow event for all three ranges. Choose your access points and your terrain options accordingly.

We made it to big bear up the desert route Friday morning under R2. The roads weren't bad except the aggro truck drivers trying to pass, including one who crashed immediately after passing me (ha!).

Bear was fantastic. Whoomps in the snowpack quickly made me leave the woods, but the trails were spectacular with a decent amount of untracked to be found. We headed down the mountain that evening, but saw plenty of others going up friday night after waiting out a horrific backup at the mitsubishi plant.

Not sure about today, but I'd guess the same.

I'm impressed you got up there!

Growing up on the Eastern Sierra, we have seen one of two patterns since my early childhood. There actually used to be these phenomena called “Normal Winters.” Not drought. Not extreme dump. Normal. When was the last one?

To answer your question, I think climate change will make the “norm” a massive pendulum swing. Extreme drought. Extreme snowball. Back and forth it will swing. We’re on a multi-year extreme wet trend at the moment, and that on the heels of three years of horrific drought statewide.

Great photo, thanks for the update!
It seems to be snowing heavy all over the USA right now.

Made it to mt high Saturday night. There were no lines for lifts the entire night. I don’t even try to go to a resort in day time anymore

Snow was very epic. Still lots of powder to your knee

We did some snow wheeling up in Lytle Creek North Fork on Sunday. We got to the 5000 foot level where coldwater canyon entrance branches off the main road until we hit a 3 foot snow drift and were unable to proceed to stockton flats. We drove up Coldwater Canyon making it to the 5300 foot level where the snow was measuring 28 inches. Incredible amounts of snow for the area.

I was thinking of that road! Good call. Maybe I should publish a list of SoCal snow access points for when all the main roads are closed. Or maybe not? For the record, I don't think Stockton is a safe area in storms because of the way Harwood's NE faces avalanches (although there are some ridgelines/flats that might be o.k. if you've got good routefinding skills).

Apparently the 2 worked out o.k. also despite the lower closure because there was snow right at the gate.

I made it up Saturday to SS. As always, “alpine start” is key. The 6:30 am chain checkpoint at Mitsubishi’s plant was a 15 minute annoyance, followed up by chain-up silliness and snow travel at the pace of racing snails reminiscent of an old Warren Miller beginner lift unloading clip. My daughter’s arrival at the same gauntlet an hour and 1/2 later was disastrous. What took me 45 minutes took her 2+ hours. The decision point on Friday or Saturday for me boiled down to what’s open on the hill vs epic early cold season cold pow on less opened runs. Going solo in side country or testing as of yet unmaintained trails seemed unwise, so the possibility of more opened trails on Saturday seemed the best option. Sadly the mountain seemed unprepared to handle rapidly opening up despite the 4’ft received so Friday probably was the best shot. Still, well worth the 3 hour drive up and the 5+ hr drove home. Mammoth like conditions found but a day late for pow.

On Friday Nov. 29, San Diego's Cuyamaca Cruiser Peak had 10 or so randoneers and a couple of randonee dogs cruise the 3-mile fire access road, and even a womens' birthday bash at the peak. Good for warming up the ol' legs to start the season. Lot's of snow between that 5,000' base to 6,500' peak.