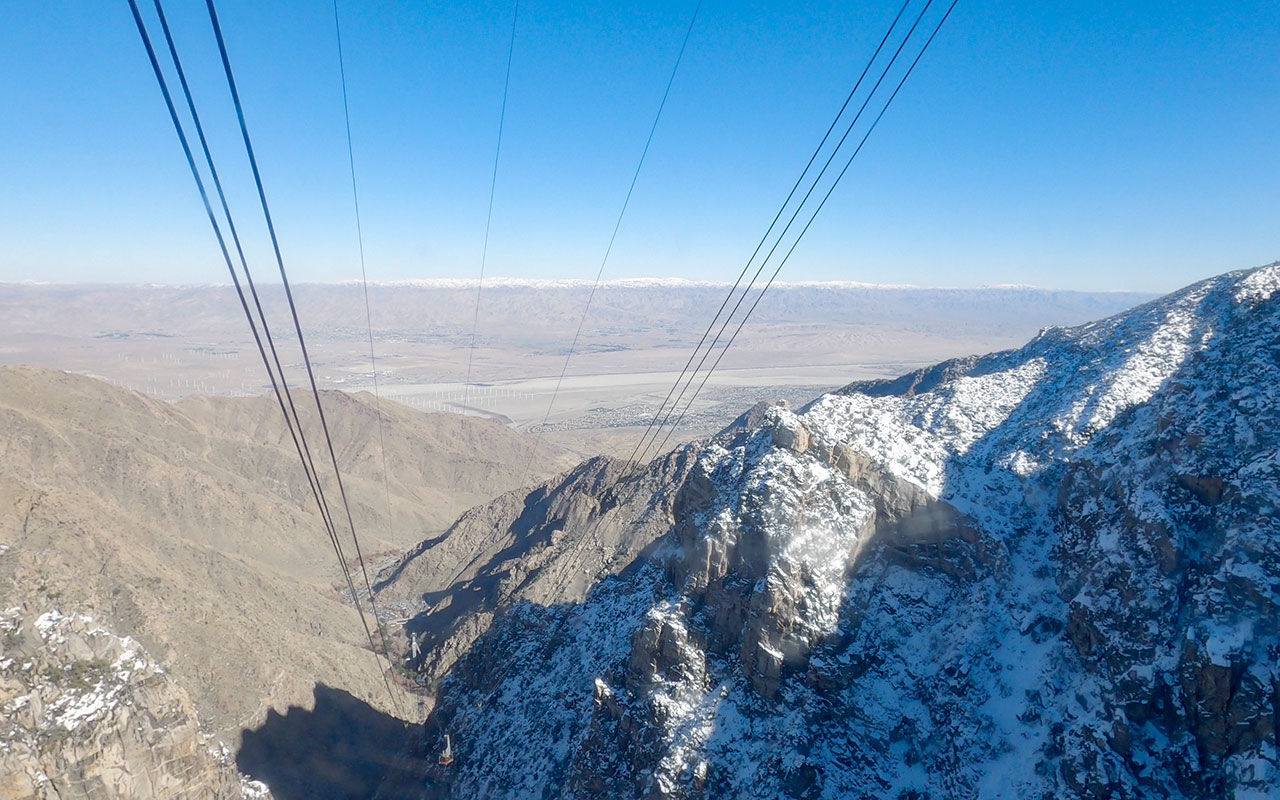 A truism of Southern California is you don't get good SoCal skiing unless you risk getting bad SoCal skiing. We got the bad version yesterday, which began with stunning lines at the Palm Springs tram that put us a full four hours behind schedule.

And we arrived before 8 a.m.

Well, to be fair their site warned about holiday crowds. Still, I've never seen it that busy that early. I hope I never see it again. Yes, we should have bailed, but we got into one of those classic sunk costs traps (plus there is value in voluntarily suffering; it makes everything else in your life look great in comparison).

Fine. There isn't a ton of snow up there, compared to years past, but the coverage was at least good enough from the Long Valley ranger station all the way to San Jacinto Peak.

Given the recent storm and the cool temperatures, I was hoping for at least a few pockets of good snow in shady/protected areas. That was just barely the case—but those pockets really were isolated. Much more widespread was wind-affected snow all over the mountain, including the protected treed slopes around Jean Peak.

The wind direction seemed odd to me. Maybe it was a West wind? Regardless, boy did it hammer the snow, even in the trees. Conditions ranged from windslab to crust to chowder; it was a bitter pill on an already bitter day. Dinner was good. I got the Beef Burgundy. And the staff seemed to be (mostly) maintaining their senses of humor in the face of a very, very busy day.

I heard things were a little aggravating at Mount Baldy, but that they did get the lifts turning and the road moving. I heard that the wind also hammered the snow in the San Gabriels, making current conditions hard to parse. More snow looks to be on the way.

Oh well. We are Southern California skiers, after all. That means crowds and unexpectedly wrecked snow are always part of the forecast.

Bensweather,com describes the 12-25/26 storm as a backside slider where the wind pattern favored the desert side of the San Bernardino’s. Surprisingly I found Thursday’s wind direction at Summit was out of the south though, often 25 mph plus blowing downslope (south winds) creating an awesome pow version of the Peanuts character Pig Pen where at times wind propelled airborne snow would hover around you for several turns traveling at the speed of the this skier. Sorry this storm didn’t result in a better day for you on SJ- kinda figured you were going there but predicted glory instead gory.

I took the tram up on 6 December, hiked to Wellman Divide, skinned to the summit from there, and skied to within a five-minute walk of the tram station. Several hundred yards of delightful turns from the summit towards Miller Peak followed by a skating rink on the eastern slopes and then some patchy fun from Wellman divide back to the first creek crossing from the tram station. Wasn't great but it wasn't awful and I had the whole mountain to myself; didn't see a soul more than ten minutes from the tram. Hoping that Waterman is open this weekend...and that the crowds head to Mountain High, Baldy, or Big Bear! LOL

What's up with having to pay for parking at the tram now, by the way?!!

Thanks for the report Andy! I'm eager to ski up at San Jacinto, but I'll wait for the next storm cycle for hopefully better ski conditions.