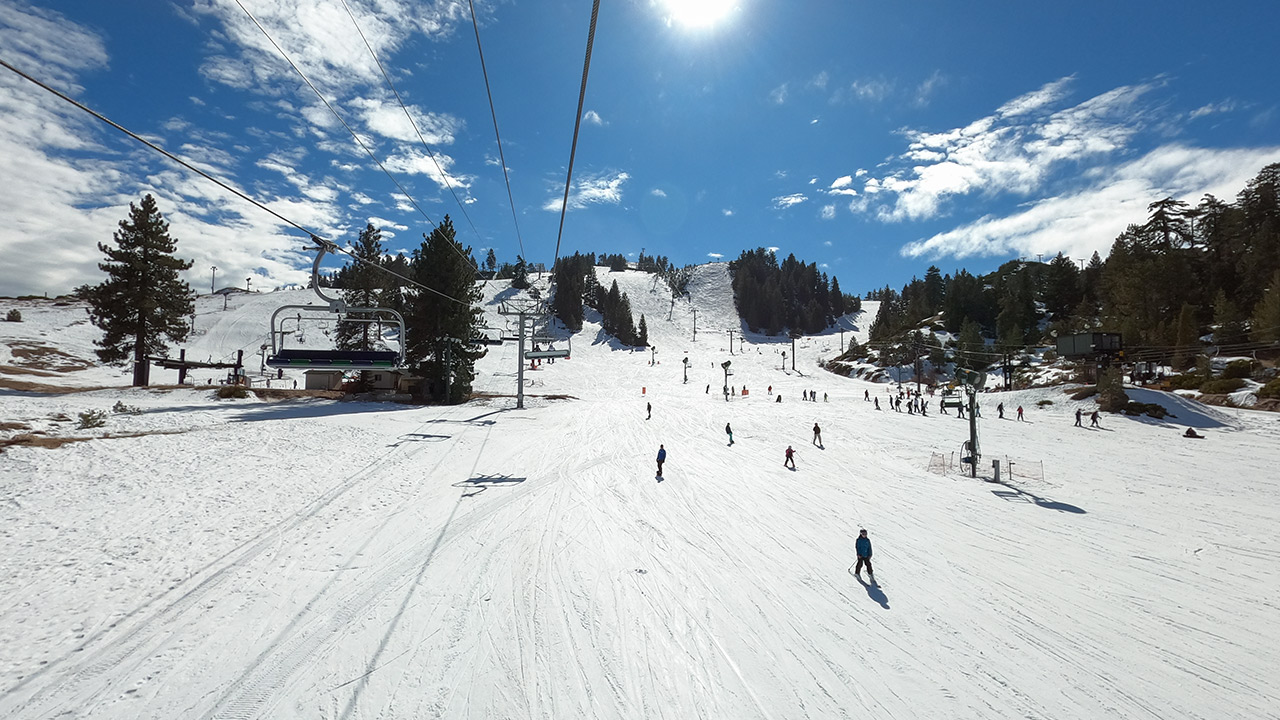 Sunday at Snow Valley was a handsome day, starting out mostly cloudy and then finishing off with a nice burst of sunshine in the afternoon. Coverage on the hill is thinning but still skiing nicely.

Elsewhere the snow is rapidly melting off the usual aspects, and I see that some of our local weather gurus are starting to sound a bit edgy as our dry spell wears on. Baldy Bowl looked thin but skiable above the ski hut as we drove past on an unusually foggy 210 freeway.

San Bernadino Mountain, as seen from Snow Valley's summit, looked surprisingly thin—though I assume Gorgonio's NF is in better shape. In contrast I'm still hearing coverage is good in the Waterman region; given how close the 2 is, that's where I'd go right now.

On the subject of Snow Valley, let me engage in my annual boosterism and tell you that Snow Valley's season pass (usually on sale March/April) is a fine deal if you like to ski local resorts but hate making the drive all the way to Summit/Bear Mountain.

You get 3 days each at Mountain High and Mount Baldy per Snow Valley pass (some holiday dates are blacked out) which lets you hedge your bets on both resorts, rather than committing to a season pass for either.

If there's snow at Baldy or Mountain High East, you come out a big winner. If not, you get a newly-upgraded snowmaking system at Snow Valley, a high speed six, relatively light crowds, a fantastic parking lot, and a reliably less-awful drive than Big Bear.

The terrain is modest. For my kids, there isn't much to be had in terms of challenge anymore, but it is a way to get them into the mountains and onto snow for a day vs much less frequent Mammoth trips, and it helps protect them from the desire-killing gridlock of driving all the way to Summit and back.

We probably won't go back this year (providing Baldy and/or MH East stay open through March), but for us those Snow Valley passes have already earned their keep. Note that you also get 3 days at Brian Head and Eagle Point, in Utah, Ski Apache, in New Mexico, and Sunlight in Colorado. Boy I wish they were partnered with Waterman also—wouldn't that sweeten the deal!

Overall, Snow Valley really shines as a laid-back, family-friendly SoCal resort. It's a great place to take the kids or anyone else who'll enjoy wide, moderate groomed terrain.

On a more somber note, if you can, give your loved ones a hug or a call and tell them you love them. Today seems like a good day to do it.

Did a Mount Baldy hike-and-ski from Manker Flats on the 18th. The south-facing slopes are done for now but I was able to ski a continuous and enjoyable line from the summit over to the west side of the bowl and then down to the ski hut . . . which was a better outcome than I anticipated after my initial look on the hike up. Heading to San Gorgonio this weekend. Fingers crossed for some fun turns on the north aspect . . .

While still a capitalist pig, SS new (er) corporate overlords disappoint on several elements:
1. Dicky’s (founder’s name sake run no less) and Side Chute have essentially been abandoned , no maintenance in summer or winter. 4’ of new doesn’t cover overgrown brush, “closed signs“ are up most of the season, not a hint of man made snow to soothe the hard cores. 3 of last 4 seasons would normally have been viable but for advanced skier abandonment policies.
2. Upper lodge foods (top of chair 1) have devolved into a weird Mediterranean fare. Even staff complains, yeah I went there. And yes I had great fun with the SS “tell us about your visit” faux report card earlier this month.
3. Paid Parking!!!
4. No senior passes (Ikon), I qualified 6 years ago for SS 62=senior plan only to get 2 of last 6 at senior rates per policy changes. Yeah, I get it, old guy who cares...until it’s you (or your dad!?!).
5. Failure to open entire mountain for nearly a month after epic, and historic Thanksgiving day snow manna.
6. Paid Parking!!! Repeated for humorous (attempted) emphasis or senility reasons, reader’s choice.

Still worth the extra travel time, until the ”no good deed goes unpunished” drive home through the flat lander zombie apocalypse horror show of the front side route.

I understand SV is still family owned!? SS was great under old management, perhaps a hint contained there in. I guess it’s like the weather, everyone complains but no one does anything about it...other than my C minus report card. Sad.....on the plus side SS seems to now whack chairs a couple of times on pow days-dry butts rejoice-...a touch of Vail nostalgia elicited from a previous SD post. Despite the gripes any number of Warren Miller quotes account for me going at least once a week, er except Mammoth weekends made more affordable by the Ikon pass...so there’s that...

Sharpen your edges! Kinda shinny and shady looking on that steep north aspect as safely viewed from my hike free lunch perch at SS on 1-25. Hope you get lucky per weekend warmup. Steep (er) north facing ungroomed at SS at a lowly 8k were semi hockey rink-ish so caveat emptor at 11k+. Maybe check out Bensweather.com SG
cam!?

I am sure there are folks in other places who read me gushing about a parking lot and think I've lost my mind, but not beginning and ending your day (1) in mud (2) that you've had to pay for and (3) that's a long, long walk to the nearest lift is like SoCal ski resort manna.

Aha, you’ve exposed my secret plan...ALPINE STARTS for resort skiing! 7 am in the parking lot avoids shuttles and paid parking (weekdays, late season weekends). It also avoids sleep but us BC guys know the drill.

Coverage at Waterman was good two weekends ago. I skied there the first day it opened on Saturday after 2 inches of snow to refresh the pack and it was really good. By the following Monday, a lot of the snow developed a melt freeze crust and felt crunchy. same with Kratka Ridge. We found some soft snow sheltered in the Avy Bowl off the westside of Waterman. @Mark, reply back on San G conditions? I would also assume its pretty firm.

Thank you for the scoop, Brad. I'm expecting the worst and hoping for the best on Gorgonio . . . which is usually how you have to roll when it comes to SoCal backcountry skiing.

And alpine starts are okay but the truly dedicated drive up the night prior and sleep in their rigs. Great if you have a Suburban, not so much if you're in a Prius. This, of course, is only half the battle because you still have exit gridlock to contend with, but I've found that an hour or two of tailgating after you get off the slopes is sometimes just the ticket. Just have a designated driver.

And Ethan, I will be sure to follow up with my San Gorgonio experience. Fingers crossed.

Ethan and Brad, as expected, slim pickings on Mount San Gorgonio. Summited via South Fork trailhead, Dry Lake, and the north-facing chutes. Pockets of powder here and there . . . under two or three inches of windslab. A little low-angle skiing available from near the false summit over to Jepson but all the north-facing drop-ins are sheets of ice. I carefully downclimbed the big draw northeast of Jepson, put on my skis at around 10.5k feet, and descended barely-skiable terrain to your more typical variable crud about a thousand feet lower. From there, snow quality improved dramatically and I was able to get some fresh tracks on the northeast slopes above the South Fork until the vicinity of South Fork Meadows. A lot of work for not a whole lot of great skiing, but a fun day on the hill nonetheless. Did not need skins; microspikes will get you to the top. You'll need them for nearly the entire time you're not on skis: Ice and frozen mud all the way down to the trailhead. Happy trails!

Mark thanks for the report!

Everyone else please note climbing up and down those big north faces when they're icy is high-level mountaineering.

Depending on temperatures and how saturated the snowpack is, those upper faces may not soften until mid-March...or later.

Noted! Thanks for the report. I'm hoping the high pressure system this week will soften up the snow but I doubt it.

Thx for being the (non) crash test dummy...the main reason I mentioned my high sketch-o-meter readings last week. Thx for the report and the care you took back there. I know the terrain a little. My hike buddy Bob and I traversed the ridge line from Charlton/Little Charlton/Jepson/SG last October, ascending South Fork TH/descending Vivian Creek to TH (20.6m/5,500’, vehicle shuttle scenario, BIG day). My caution was prophetic as my concerns were in-bounds tested Friday via high speed crash. Hard impact on very firm “snow” left bruised ribs, some whip lash, and lower back ice rash/lumps, colorful thumb nail, aluminum splinter (more injury report to follow below). This occurred on blue diamond territory, nothing like the hockey rink you encountered but still firm, though edgeable where groomed.

As Gear Master General I thought you should know that the Look 14 bindings have now, similarly l, failed me 3 times, one of which you heard about:
Dec 2014 Alpine Meadows forward fall in 12-18”, skis speared into snow gully, full forward ejection scenario, left binding failed to eject (total use 5 days). Subsequent binding tests were negative. Significant soft tissue issues in ankle area, 2 months off skis and poor skiing thru May Per weakness/pain.
Dec 2019 Snow Summit 12-18” forward fall, left binding failed to eject under significant outside twisting that snow pack finally yielded too, approx 60 days use. Skis tested at REI, these 5 year old bindings were “FAILED” (first of any brand at that store this season). Wrenched knee resulted, hobbled for a few days, could ski next weekend.
January 2020 Snow Summit (4 weeks later, day 3 on new replacement bindings), tip cross (suspected, or snow snake, early release, foggy on start point?) left leaning fall at high end GS speed with above injuries (could have finished out the day with just those) plus same left leg twist and failure to eject issue (right binding ejected immediately), epic yard sale stretched over 75+ yards. Wretched knee resulted , worse than December, hip flexor strain also, were both direct result of binding failure, X-ray results expected Monday, healing may take a little longer (assuming no surgery) this time-felt way worse and ended my day unlike last month. Testing that same day at REI revealed inconsistent release points expected from original DIN setting expectations. This will be my first returned item to REI. Staff/Management handled it well some 3 hours post incident (still had ski pants and IKON pass on).

I’ve been skiing for 48 years. The only binding fails I’ve had were during the last 3 consequential falls while on this product. This 3rd fall was on the 2019/20 version of same bindings, with only 3 days of use. Caveat Emptor to my fellow riders, hope my “research” enlightens purchase decisions, new Markers arrive tomorrow. I’ll report if more is learned from REI/Look.