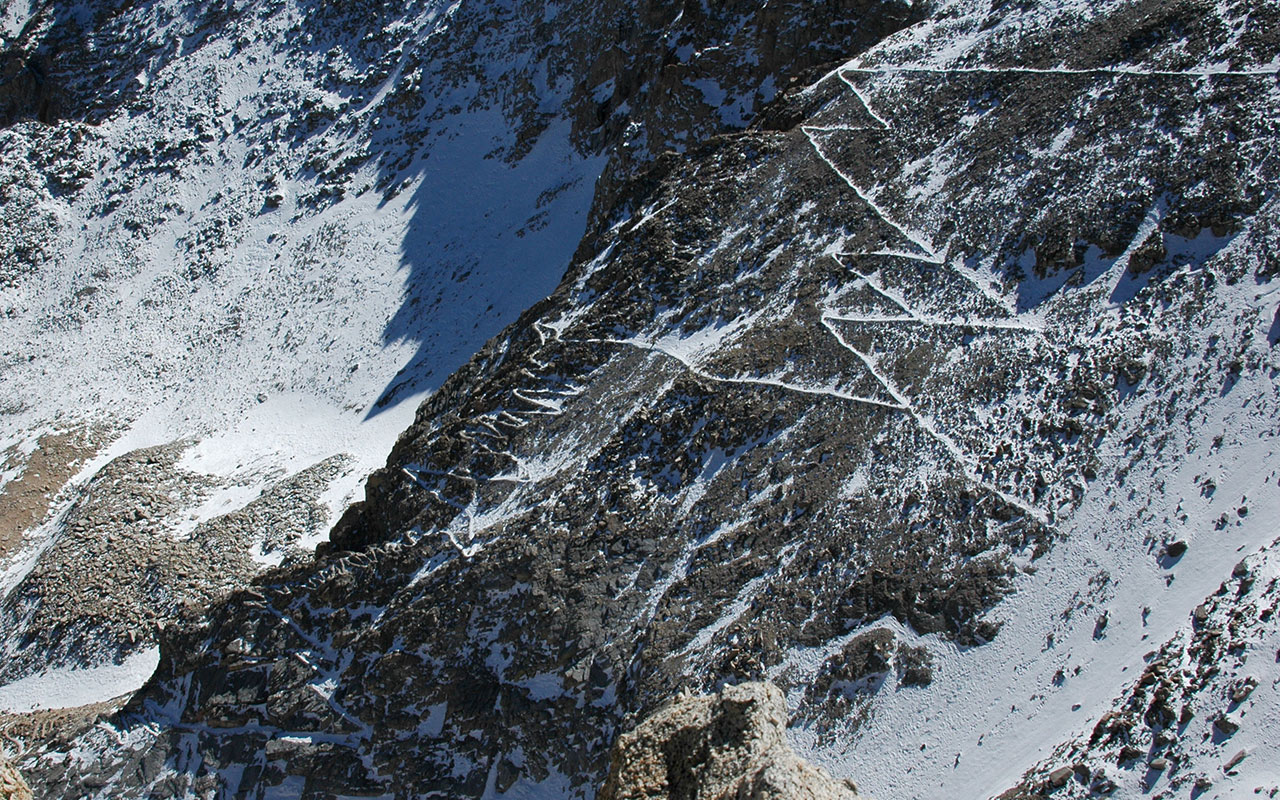 How many switchbacks are there between Trail Camp and Trail Crest on The Mount Whitney Trail? A lot. The exact number may never be known, but 101 seems to be the most popular answer.

I love the way the switchbacks keep going and going. And where it seems they finally come to a stop, look closely at the photograph and you'll see they just keep on going.

Not so lovely, maybe, is the feeling you get when you're starting up the bottom of them.

That's not-quite 2000 vertical feet of climbing, which isn't unreasonable by Sierra standards. Then again, you're starting at 12,000 feet, and the trail doesn't straighten out until you hit Trail Crest just below 14K', so perhaps some degree of existential angst is warranted.

In any case, the 101 are an iconic part of one of California's most iconic climbs. On this day I skipped Whitney and scrambled up Muir instead. At the time I was very focused on climbing all of California's fourteeners, and Muir seemed like a nice easy pick.

I can't tell you exactly when I decided I wasn't exactly a climber, but perching on Muir's airy top certainly contributed to my awakening. Give me snow and skis and I feel at least tilted toward competent. But bare rock and I have always been on less-than friendly terms.

It's good to know your limitations. For me, I'll take the certainty of the switchbacks. Put me on the path, point me in the right direction, and I can go forever because I know all I have to do is put one foot in front of the other. That's what I call clarity.

Try counting the Mount Whitney Trail's famous switchbacks yourself the next time you're visiting, and let me know what you discover. I find the number itself isn't that important.

The day my Dad, my brother-in-law, and myself did this it was overcast ... clouds moving through the air and sun shining through. So stark, yet so beautiful. Storms moved in and it snowed heavily (about 6" in an hour) on the way down, complete with massive thunder and lightning. It was August 22nd, 2012.

My bro-in-law always used to give me a hard time because I bring my ski parka up in my pack on any and every overnight trip into the Sierra High Country any time of year ... after this trip, with the frigid snowy temps in August, he never gives me a hard time about it anymore. No he brings his, too. ;-)

I will forever cherish in my memory standing atop the lower 48's tallest peak with my father ... he's my hero and always will be.

Been over Trail Crest 3 times, summited 2X (Labor Day weekend 1977, 10-26-18). The last time was a(slow) day trip on short notice. My wife had only been home a couple of months from a 6 month hospital stay but was kind enough to say “go” bc I’d missed my Range trip early. We left for LP with maybe 5-6 hours sleep over the previous 2 nights (Bob and I were both caretaking loved ones, much prep work to leave them in the care of others). After a 1.5 hour nap in LP we drove up and hit trail around 3:30am. About 24 hours later we were back at the truck. We were at Trail Camp respectably by 8 but it took until after 3 to summit per no acclimation and sleep deprivation. We hit the Crest just at sundown, put on micro spikes and off down the switchbacks in 4” of fluff. If I’m seeing it correctly the upper trail section in the pic is where the cables are. Somewhere below that is one on Bob’s BD trekking poles that slide off their perch on the cables. We both dimly wrestled with thoughts of a pole rescue but soon figured the snow covered slick rock, no spikes or rope made another form of rescue more likely. As it was, failing to achieve my estimated return time by some 8 hours led to an Inyo SARS inquiry by my wife. The wise Sheriff Sargent asked some great questions and after she reeled off some our routes over the last few seasons he concluded we were fine, he had no reports of distressed hikers, and we should show up soon enough. As so it was as we hike/napped the rest of way back. In other words another awesome Sierra trip!!