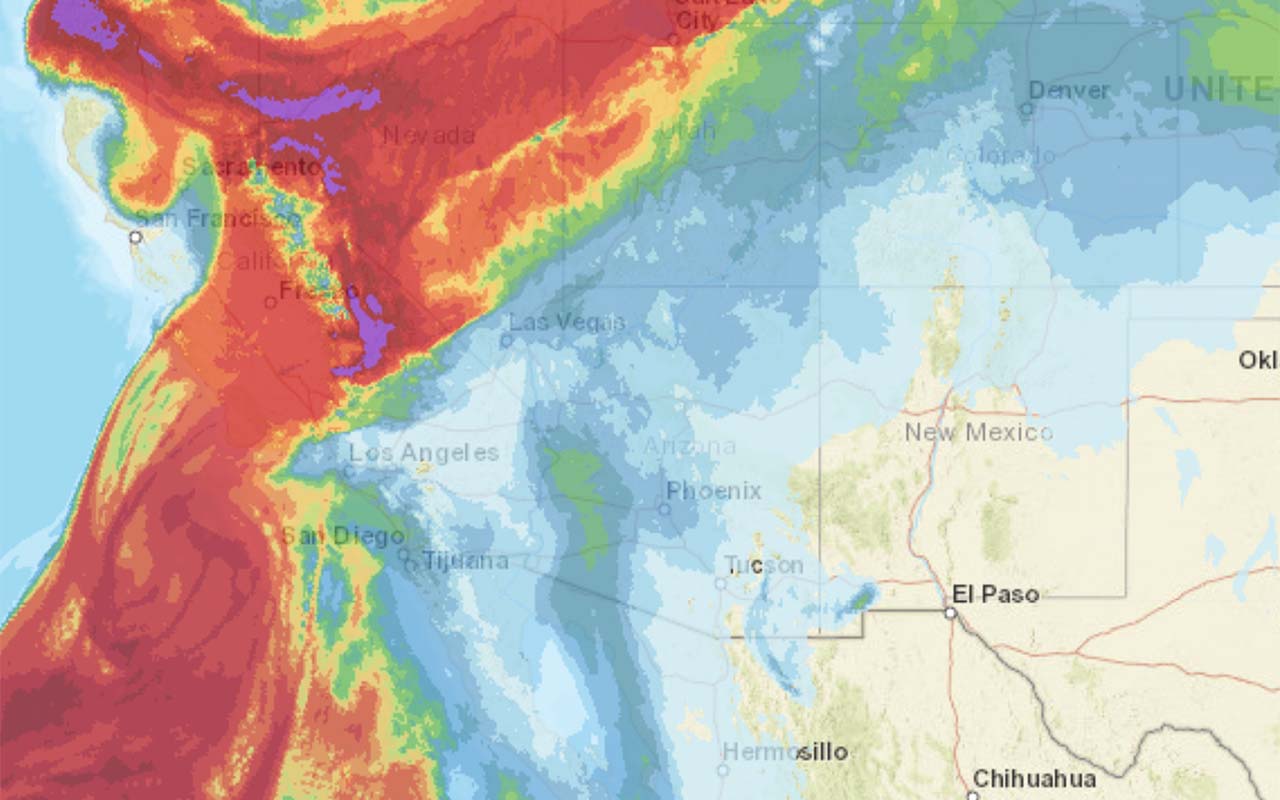 In summer we used to worry about thunderstorms and permits. Now we worry about smoke. Climate change is transforming the Sierra hiking and climbing season into a dystopia of wildfires, charred landscapes, and smoke.

We seem to have entered a new phase in the evolution of the American west—one featuring megafires which cannot be prevented* and, once begun, cannot be stopped. The implications of this change are only just beginning to make themselves known.

A good smoke forecast is now, alas, an essential tool for your summer/fall planning. NOAA seems, slowly, to be responding to this need; they've created this tool, which is currently wonky and 'experimental' but probably your best bet for real-time accuracy.

If you don't trust the government, there is also PurpleAir for real-time PM2.5 sensor data. Compared to AirNow, PurpleAir tends to show suspiciously higher levels of pollution across the L.A. Basin, as well as more local variation...which suggests it might be more accurate. Maybe.

Wildfire Today is a private blog covering all things wildfire-related. They also post smoke forecast visualizations pulled from the NOAA data. Via Twitter you can follow the HRRR SmokeBot for user-friendly animated maps pulled once again from the NOAA dataset.

Finally, you can track the wildfires themselves via the LA Times' interactive map. And heck: here's the Windfinder, too. If you know of any other good resources for smoke forecasts, please let me know. Not a lot of good news here, I'm afraid.

*(I am agnostic on the subject of thinning. I support it, wherever politically feasible, as an experiment which may or may not work; thinning on the scale necessary to save California's forests seems logistically impossible, even if it were politically possible—which it probably isn't—and in any case, the long-term climate trend is not favorable whatever treestand density you're arguing for)

I went to Sequoia and Kings Canyon in spring of 2016 and was absolutely shocked at the tree mortality below around 6000'. The megadroughts are changing Sierra ecosystems right in front of our eyes.

My 9-13/15 res for Red Lake is trashed per 8-31 to 9-17 full closure of all CA federal forests. That’s 3 years running my Split Mnt or Middle Palisades plans have been knocked out.
And just heard highway 2 is closed in mountain areas.

While current warming trends are no doubt contributory I’d say the easiest fix is via good forest management. Everything we need to know about forest management was practiced by the First Americans for thousands of years, ie regularly burn the forests. We learned, or should have, this same lesson from the ‘88 Yellowstone fires. When you don’t allow clearing, reasonable logging, and management fires then undergrowth and tight tree spacing occurs. Dense tree spacing reduces available water per each tree which leads to sick trees which invites bark beetles and you have a recipe for millions of January like dried out Christmas trees-just add match (or PG&E). Add droughts and it’s Armageddon. And sure droughts are bad but tree ring studies show that 180 and 200 year droughts occurred in Ca in the last 1000 years-long before the notion of global warming or the man power to cause it. The last 10 years have seen several drought years but they’ve been somewhat offset by heavy rainfalls seasons in 2011 and 2017. California is a Mediterranean climate, hot and dry has happened for centuries though the current warming trend is making it a little tougher. Remember too, our forests depend on fires, unless they are ridiculously hot as these current ones are, so the old Smokey the Bear campaign of fire prevention was a little out of touch . Strictly based on a cost benefit ratio, forest management practices would solve this issue much faster and cheaper than a poorly complied with global carbon reduction program-don’t expect China or most 3rd world countries to pony up for that one anyways. Oh and managing the forest would have a direct carbon reduction benefit so win-win!?

The 'forest management' argument implicitly assumes we're operating in a 20th century climate. It's far from clear if fire and/or other thinning strategies can play a similarly beneficial role for California's forests in a 21st century climate.

I do think many forestry experts/journalists are simply unable to process the enormity of the threat that ~1.5°C of warming poses to today's forests. It's been hard for me to accept how quickly things have changed. But there is no going back to baseline.

I've been following wildland management and wildland firefighting for about a decade now. These fires are truly unreal in their scope and how easily they reach juggernaut status where no efforts can quell their advance. Years ago, I found the pre-records estimates of 300,000+ acres burned in the Santiago Fire of 1880 (the largest recorded burn in the state) non-credible. It was a record that stood for a century.

Concerning forest management, it is my understanding that prescribed burns are the primary instrument for "managing" fuel build-up.

As it happens there is sincere political support for prescribed burns. But much like NIMBY interventionists that cratered high-density housing development in the Bay Area, local air resources boards shut down prescribed burns. These boards often get local complaints about smoke and then lean on politicians to terminate burn operations. IMO this is something we need to change, perhaps by kneecapping some of these ARBs.


Andy makes a good point that climate change is altering FM practices. Some of these practices changed before broader climate change awareness, namely that 10 AM firefighting policies made conditions for megafires worse. But we are also realizing that we may not be capable of having the 10 AM policies if we wanted to. These fires may be too untamable. We are seeing the ample resources applied to the Caldor Fire hardly making a dent. The 21st-Century model is changing.

But I think it's a mistake to assert that since we cannot fully know the scope of 21st-century climate effects, that the tools we used in the century prior have no value. Taking the current data we have for the efficacy of thinning as proof of its full capability is based on an unreliable set of information. As I describe, the practice is being half-heartedly applied. Furthermore, we must also account for how much these megafires clear out as they pass through. Based on the information we have, selective thinning/prescribed burns can supplement the scars left by megafires to work towards an equilibrium. The more we work to thin now can get us to the equilibrium where we aren't relying on capricious megafires.

Is the ideal application of burns the full solution to the problem of megafires? We don't have the evidence to say that. But it is perhaps the BEST tool we have currently. But it is clear we need to take action. The stakes are just too high; just last year the Sequoia Complex Fire (the Castle and Shotgun Fires in south SEKI) burned through a stand of Giant Sequoias after a day of erratic behavior that experts had not foreseen. Sequoias, especially mature specimens called "monarchs," are specially adapted to survive fires. These thousand-year-old trees can survive fires with as little as 10% of their crowns unburned. This unusually intense fire killed many mature trees. In fact, this one fire wiped out 10% of the global population of mature Sequoia monarchs.

I think we need to work to tie the hands of these ARBs, begin winter and early-season prescribed burns, and let wildfires burn in remote areas. We need to get lots of data on these forest management tool uses and use all tools at our disposal. This is just one part of a bigger climate strategy. I do think we need carbon reduction programs. Forgoing these (on grounds of hypothetical non-compliance) is kind of a non-starter.

Anyways, thanks for coming to my TEDtalk.

It is hard to write about any of these issues without falling into a sort of Climate nihilism. When I'm feeling especially despairing, I tell myself the one thing we (humanity) have going for us is that no one knows for sure what the future is going to look like--climate included.

That said, I think we can make some guesses about California's forests. Large-scale forest management is now likely to be conducted by megafires. Human management will probably focus on creating thinner "barrier-forests" around key areas (like S Lake Tahoe).

The prescribed burns are going to be complicated. The season in which they can be safely used will steadily shrink (in some years, it may simply be too risky to start fires, even in winter). That will push us toward using saws and bulldozers (as they are in Arizona), but either way, we're going to have to admit we don't have a lot of control, and the effort will have to focus on specific rather than forest-wide goals.

What happens in the megafire burn scars? Evolution, probably, toward scrub and grassland, depending on microclimates. The soil will be drier, and the air will be hotter and drier. That would be trend.

It's also possible we might flip into a wetter/cooler pattern. We are, after all, entering each and every winter with a brand new atmosphere, in terms of energy, dust, and carbon. So expect a lot of variability. But also, damn it, expect that variability to be centered around a steadily warming trend.

I guess I should say, also, we're probably going to evolve toward a system of 24-hour suppression strike forces wired into tech and air support whose job is to instantly stop lighting (and other) ignitions before they can spread. That will necessarily be an imperfect system, and it will meet resistance from those who argue it was aggressive suppression that created this mess in the first place. But this seems like an obvious pathway to me, as reality becomes harder to ignore.

Good forest management is not the problem, though. Before modern humans, there was a profound history of forests on this planet. The supermajority of coal deposits, for example, globally come from the carboniferous period in Earth's history. However did all of thoses forests survive and thrive without good forest management for all of those hundreds of millions of years??? The recent history (since the last ice age) is really well documented in the form of tree rings, particularly in bristlecone pines. While there have always been fires, the scale we are seeing today is just different.

Since 2010, that has been different. There has been forest fire smoke every single summer since 2010, and that smoke has gotten worse during that time period. Now, even after a wet winter, we see smoke that moves in and lasts for many weeks or even months at a time.

This is different. While is is true that humanity is not THE cause of climate change, human industry absolutely has unbalanced the natural forces that drive natural climate change. I'll spare everyone my TED talk ;-)