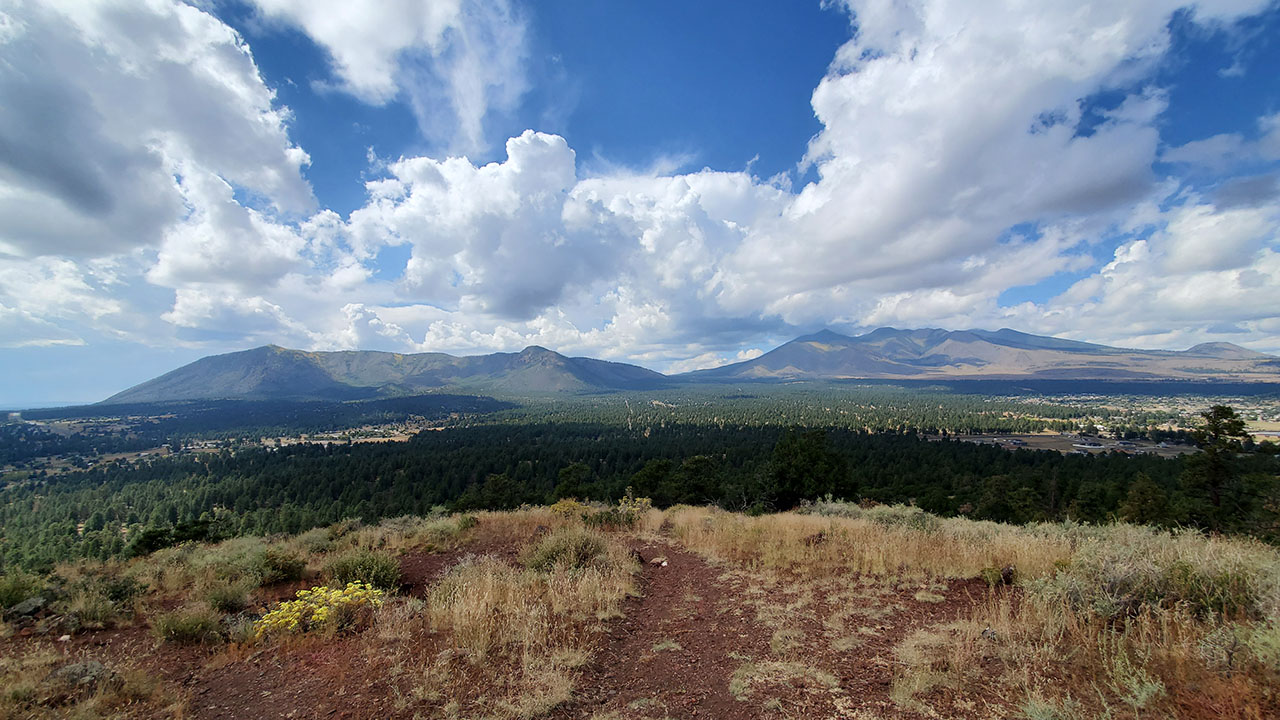 It's a short hike to the top of Arizona's Old Caves Crater, a 400-foot cinder cone whose network of lava caves at the summit served as the last known dwellings for the area's Sinagua ("without water") people, circa 1325.

Why did they build their homes atop this crater, with the nearest water a laborious two miles away? Maybe they liked the view—a stunner of a panoramic sweep encompassing Mount Elden and the San Francisco Peaks to the west (seen here), and the high plains of the Colorado Plateau to the east.

Following two summers without, Arizona had a robust monsoon this year, helping the area's drought-stressed forests recover, at least a bit. As for the air, it's clearer, certainly, than you'll find over California, but still hazy compared to those normally pristine Northern Arizona skies.

Even here, the wildfires cast their shadow. You can see two prominent burn scars in this photo: 1977's Radio Fire, on Mount Elden, perhaps a harbinger of the West's coming catastrophic burns, and then the devastating Shultz Fire, in 2010, a heartbreaker on the Peaks themselves, and still a source of dangerous debris flows.

Greenery has returned to Mount Elden's slopes, though not in the form of forest—it's a more scrubby blend including many plants that didn't grow here forty-plus years ago. As for the Schultz burn, the landscape remains essentially denuded. Whatever eventually grows there, it won't be the same as what was.

I love these places. For me they always represented not just home but also permanence—things I took for granted as immutable. Of course that was always an illusion. Change is inevitable, in both human and natural worlds.

Life, over these past eighteen months, has been a long lesson in learning to let go and accept change. It's been hard. But the mountains are still here, and so am I. I'm going to enjoy some fall hiking, for now, and that chill in the air says winter is coming. That's a change I think I can embrace.

Nice to see all that greenery... glad AZ had a good monsoon year. If there was ever a time for California to have a great winter, this is it.

Incredible that a 1977 burn scar is still visible; I would have thought it would be long since recovered. As for 2010... ugh, those big AZ and NM fires from back then feel like they were previews of the big fires California has been having lately. I can't help but feel like we just saw San Gorgonio go through this transformation between the Lake, El Dorado, and Apple fires, and we are seeing it over the last 5 years in the western Sierra. It's hard to imagine those low elevation foothills in the Sierra coming back the way they were.

The mountains are still there, and so are we. The forests may not be able to come back the way they were, and we may not either, but we and they can all be reinvented. I've decided that even though the mountains may not be permanent, for this life, they are permanent enough.

Gorgeous shot. My wife and I really loved the area when we had our amazing Grand Canyon trip in 2019. I could totally love in Flagstaff or surrounds.

Live in … need to proof read more carefully on my phone.

I hope your autumn is a nourishing time mentally and spiritually.

Dan, loving in Flagstaff sounds like a good idea, too! :)