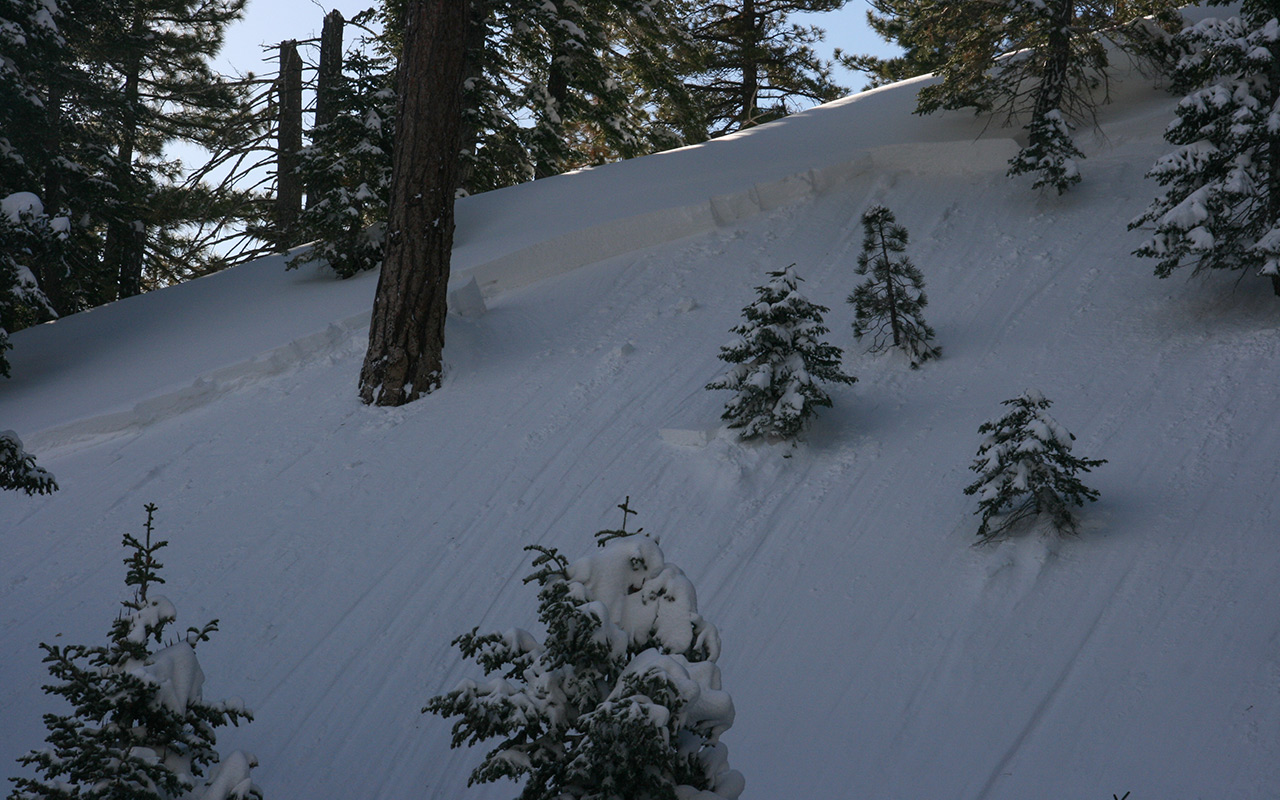 This morning, I spoke with Jeff Pierce, who was the Site Commander for two of the three avalanches that took place in the vicinity of Mountain High ski area on 25 January 2008 in the San Gabriel Mountains. Jeff was also kind enough to share photos of the scene.

Jeff is Southern California's Avalanche Adviser for local resorts and government agencies, and has over 20 years of experience in the field. In addition to participating in the rescue and recovery operation, Jeff also recorded observations of two of the slides, including crown profiles.

Jeff's observations answer a number of questions I had regarding these avalanches—and they also raise a disturbing echo with a theme I discussed with Amber Seyler a few weeks ago.

Let's start by looking at the snowpack prior to the arrival of the big storm. Thanks to a period of warm weather, a hard melt-freeze crust formed above approximately one to two feet of unconsolidated winter snow, of which Jeff observed 8-12" was heavily faceted, with crystals in the one to two millimeter diameter range.

Jeff was concerned that heavy snowfall on top of this snowpack could potentially collapse the faceted layer or not bond well to the existing crust layer, leading to failures, and he expressed his concern to local ski area personnel prior to the storm's arrival. Given the forecasts of imminent heavy snow, he expected an avalanche cycle in the San Gabriel Mountains—though principally in the Mount Baldy-Mount Waterman region.

When the storm did arrive, it arrived cold, which is somewhat atypical for Southern California storms, and which raises bonding concerns, as cold snow would be less likely to bond securely with the snowpack's icy melt-freeze surface crust.

The storm also featured considerable Orographic Lifting, which meant that the initial snow fell as 2-3cm of graupel. On top of this fell 50cm of more typical, dense Southern California snow.

Following the avalanches, which occurred on Friday, Jeff arrived with a control team on Saturday to examine the scene. The team intended to ski cut Sawmill Canyon's walls to trigger any remaining instability, however, they observed such severe remaining avalanche hazard that they determined it was unsafe to proceed without clearing the area first with explosives (which were not available).

Fortunately, the east ridge, which the control team had chosen as a safe route, descended directly to the third accident site, allowing them to perform the final recovery.

Jeff observed numerous naturally-triggered slides. In his words, they were "everywhere" on north, northeast, and northwest aspects. Jeff attempted to isolate a representative column for compression analysis, and recorded a value of "CTV Q1 x 3 @ 50cm", meaning the column failed during isolation—the weakest possible result—and failed with the cleanest possible shear interface.

In other words, avalanche danger was High on all N, NE, and NW facing slopes. This was a hair-trigger snowpack: a heavy layer of dense snow sitting atop ball bearings sitting atop a hard, icy crust.

Jeff observed abundant evidence of this instability, including seeing shooting cracks on upper ridges and hearing whoomphs as the snowpack collapsed. Based on his conversations with survivors of the slides, it is evident that the victims saw similar evidence of instability at the time they were skiing.

Jeff describes one of the slides as featuring perhaps the worst terrain trap he'd ever seen: a relatively broad, loaded area that fed into an extremely narrow gully. In fact, one of the fatal slides dropped perhaps only 60 vertical feet, yet buried the victim some 9-11 feet deep. At this depth of burial, Jeff notes that the skier's partners had no possibility of digging him out in time to prevent asphyxiation.

The slope angle at the crown was 36 to 37°—within a point of the magic number for slab avalanches: 38°

The slide in Government Canyon was larger, with a 3-4 foot crown, and a run of some 200 yards that dropped 1000 vertical feet—big enough to snap mature trees.

In speaking to Jeff, it was evident that he was greatly disturbed that a number of highly experienced backcountry skiers chose to ski the backcountry at a time when evidence of hazardous instability was so overwhelming. Jeff indicated he spoke to other avalanche professionals about this, noting we have all fallen victim to the lure of powder and sometimes that clouds our judgment.

In Jeff's opinion, the most salient contributing factor was the victims' high level of familiarity with the area in which they were skiing. They had skied Sawmill Canyon on numerous occasions for years and had never experienced conditions in the area exactly like this before. This is worth repeating, as it is perhaps the single most deadly scenario which experts can face: they were on their home turf facing a set of conditions that lay outside their knowledge base.

In addition to familiarity with the area, topography itself must also be considered a factor. Viewing Jeff's photos above, it's easy to see how this relatively benign, treed-hillside might not appear threatening (it certainly would not have automatically made my hair stand up). The skiers may have believed they were traveling avalanche-safe terrain.

Still, it remains difficult to accept that experienced skiers would knowingly proceed in the face of such considerable signs of danger. This is a recurring theme in avalanche incidents that demands our attention. I must admit, my own thinking on this subject is evolving. It would be easy to dismiss these events as the natural result of human folly, but if that is so, it is the sort of folly we are all uniquely vulnerable to, however impressive our experience level.

[…] All those steep pitches on variously north aspects at least raise the specter of avalanche hazard. If you are looking for big, classic slide paths you won't find them here, but do note those little gullies can create micro terrain traps which can make even the smallest slides unexpectedly dangerous. […]

It makes me wonder about the potential for a big avalanche on what is known as "The Slide" above the town of Wrightwood. People have skied it for decades, but I am unaware of any skier triggered avalanches up there as most people descend it in the springtime when there is stable corn snow. I'm wondering if anybody is aware of any midwinter avalanches there on this specific site.