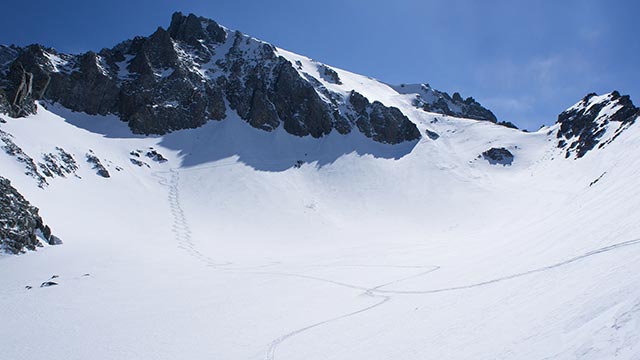 It is one of California's big mountains, colorful, complex, and consequential, and for ski mountaineers, it holds not one but several of the range's most coveted lines. Split's south face is a backcountry skier's dream—if you can get there. Wrap around to the east, and you'll quickly encounter an astounding abundance of ski extreme options. But it is Split's snowy north face (more...)

Outstanding as always Andy! Did you hear Tioga opens Saturday? It's not on the NPS site yet, but Yose superintendent made the announcement this morning.
http://yubanet.com/regional/Tioga-Road-to-Open-in-Yosemite-National-Park-on-June-18.php

What a fantastic trip! Loved the video as well. So many goals in life, so little time to achieve them all ...

By the way, can you describe your route across either of the two full pictures of Split? I'm not sure which gully you ascended just by looking at the pictures.

Dan, that's the Tinemaha Creek drainage you're seeing below Split in both photos. We ascended and descended via the neighboring Red Lake/Upper Basin drainage, which is hidden (to the south) in the photo. You can see the headwall we skied into the drainage, but then our route drops out of view beneath that cliff band connecting to Mt. Tinemaha.

Great article. I was just there Sunday 6/12 and there was still plenty of snow but it got really soft in the afternoon. I ended up down-climbing the steep face but the rest was amazing. You can't beat the views.