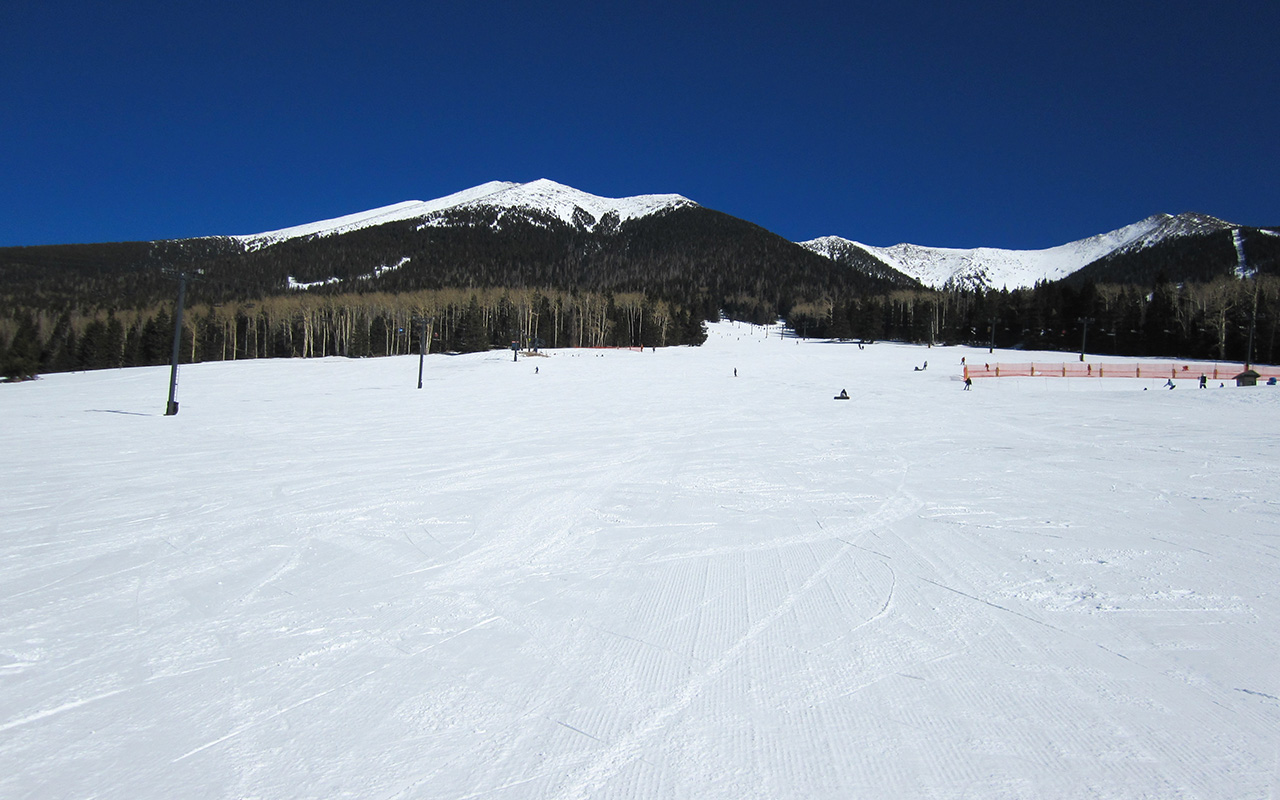 I would like to relate a little story about ski terrain and my hometown mountain, the Arizona Snowbowl. I was skiing there with my son, who had recently progressed to skiing off a leash, making turns and stopping all on his own, and he wanted to ski a run called Ridge to celebrate his new-found freedom. Most of the Snowbowl's runs are intermediate, and easy intermediate at that, so I saw no reason to say no, and off we went.

Now, what I noticed right away skiing with a four-year-old was that 'easy intermediate' was a LOT steeper than I thought. According to my memory, the entire run was gentle, the kind of thing you schuss down in one breezy go. But crawling down, turn by turn, with my son, I realized the pitch was significant, and the run was narrow. Worse, we soon arrived at the top of a short section called Waterfall, which I had forgotten about entirely.

What was to me an insignificant dropoff, a place where I typically made two or three blazing GS turns, was in fact a steep headwall probably nearing 300 vertical feet high. Waterfall, I saw at once, was utterly beyond my son's ability. How could I have forgotten it? Since then this drama has repeated itself, in one way or another, over and over, and I've come to realize something important: I see mountains with an expert skier's eyes.

Oddly enough, this creates a sort of blind spot. Ask me how difficult a ski run is, and I'll naturally frame it relative to my own experience, which may be very different from yours, and which is certainly very different from a child's. Seeing terrain through a child's eyes turns out to be challenging.

How can you learn to see terrain from a beginner's perspective? Try this experiment: visualize yourself in a full-body cast, lying on a stretcher. Now imagine some madman has attached skis to the bottom of the stretcher, and is preparing to release you atop a ski run. If that scenario induces any anxiety, you've probably found a pitch that's not appropriate—or at least less than ideal—for a true beginner.

Put another way, the ideal starter run for a kid's first day on skis is one where you can let them go and know with absolute certainty they're not going to accelerate wildly until they blow up. Find a run where their speed tops out right around a brisk walking pace, and where they eventually slide to a stop with no help from you, and you've found your perfect training ground.

Runs like these, I'm sorry to say, aren't that common—even at kid-dedicated zones like places with magic carpets. You'll need to search around, remembering always that what looks completely flat to you probably isn't flat enough. When your child does start developing the skills to stop and turn without help, you'll naturally want to up the difficulty level.

It is an axiom among professional instructors that parents habitually put their kids on inappropriately difficult terrain, and that this hinders rather than helps development.

To make matters more challenging, what is appropriate one day may well be inappropriate the next. Changing conditions dramatically alter a run's difficulty, including not just snow quality but also crowds and weather. And just as you and I have bad days, so too does your child. Some days, things just look scarier. Some days, solid and stable turns just don't come as easily.

I suppose the simplest solution is to always let your child pick the run. Let them decide what they want to ski. When they want to challenge themselves, use your judgment to gauge whether the level of challenge is appropriate at that given moment. And when they want to stay on the flats—let them.

I can tell you honestly, if you're like me you'll find it difficult to back off. We want to push them—we really do. But I say, as best you can, try to err in the opposite direction. Let them push themselves.

Once again all of this applies to adults, this story perhaps even more so. I have had many an experience exactly like you describe with your son when teaching adult my friends to ski, discovering difficulties I'd either forgotten or didn't notice before that were a major obstacle for a beginner.

That stretcher analogy is a really good way to put some perspective on it; I'll keep that in mind next time I'm with a beginner. Thanks for the tip!

Children hate getting lost. So it's a good idea to return to the same place until they originate that they want to explore. It also helps them pick their run if they have some familiarity with it.
Over-terraining any beginner, (child, boy/girlfriend, date?)is a crevasse you want to stay out of. The metaphor was not idly chosen. And it's much easier to over-terrain that you think!

Great comments Andy. It's all about perspective for the little guys. I had a wake up call a couple of years ago. We had a good snow year so I was able to take my son 4-5 times to our local Southern Sierra hill. He was doing great, making linked turns and stopping with no problem. I thought, "awesome, he's ready for Mammoth". So off we went for a father-son ski weekend. Most the lower mountain at Mammoth is intermediate terrain so in my mind this was going to be great as my son would be able to ski all over the mountain with me. There's just one little issue with Broadway and Stump Alley coming off the main lodge. I took something for granted over the years while making high speed GS turns down these runs. I had to get down to his level to understand what this eight year old was seeing. You see, coming down Broadway and near the top of Chair 6 there's a break over point. In a very short distance one can see the Main Lodge way down there but not the run before you. This can be very intimidating to an eight year old from their perspective. Stump Alley off Chair 2 has the same issue. I never realized how intimidating that could be until it was pointed out by my son from his point of view. Something to think about as we develop this next generation of extreme skiers. I like your thought process in letting our kids develop at their own pace, Andy. It's easy to get caught up in pressuring our young skiers to move to more difficult before they're truly ready. Thanks for the great articles Andy, keep up the good work.