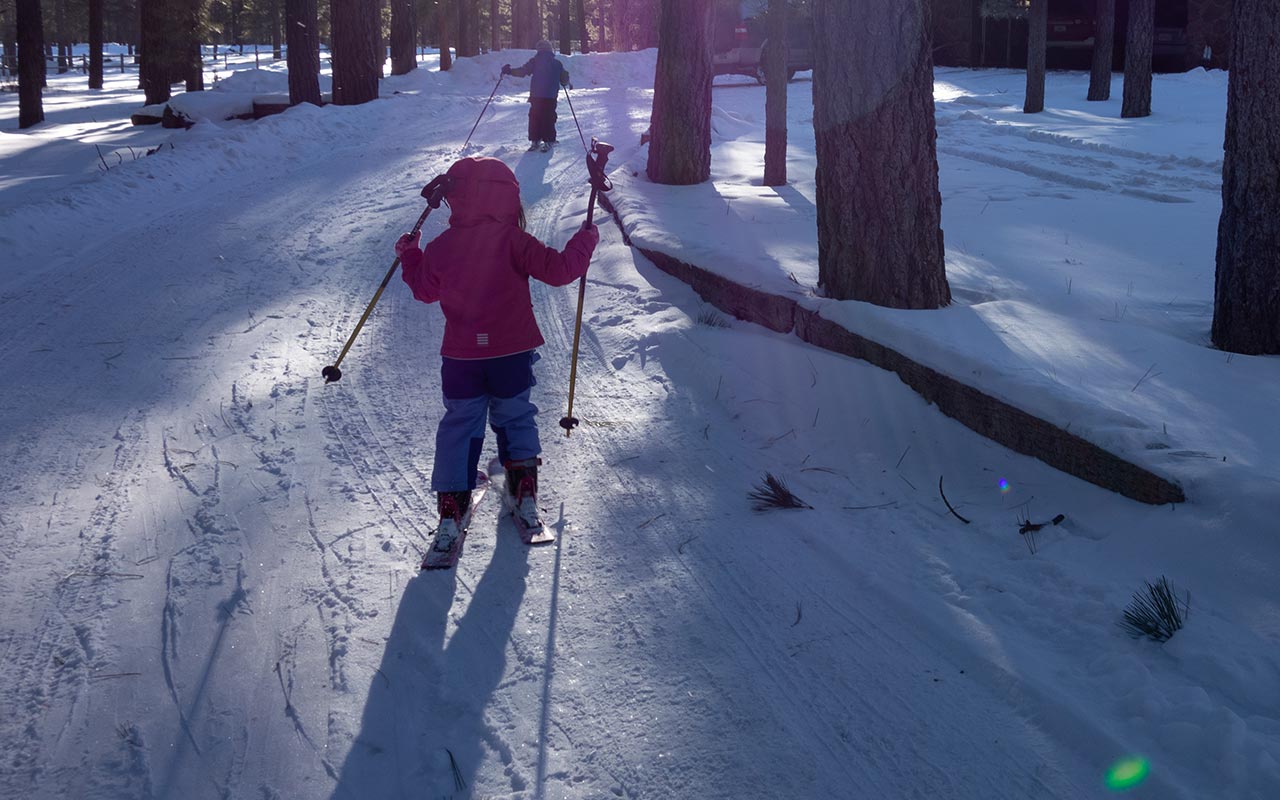 For those of you who have snow in your own backyard, I'm very jealous. Here on vacation in Northern Arizona, I've been enjoying the pleasures of cross country skiing, which currently entails no more hassle than me putting on warm clothes and stepping outside—fabulous. Naturally, my kids see me dressing up in my snow pants, and they start running for their ski clothes, and before you know it we're all outside playing in the snow.

I didn't initially think to put them in their Alpine gear outside my parents' house, but they insisted on "skiing" since I was doing it, and after a bit of pleading, I agreed to pull out their skis and boots, and some adult-sized ski poles, and helped them put everything together. Then, to be honest, I just sort of sat back and watched the magic happen.

My kids, on flat ground, went crazy in their skis. They pushed and slid and squealed in delight—and then they discovered the snow piles built up by snowplows. My son was the first to figure out that he could sidestep up the snowhill, and then schuss down it. His sister of course had to follow, and soon the both of them were fighting their way up and then rocketing back down the snow mound, over and over again.

The whole time, I was watching in a sort of stunned amazement, thinking: this didn't cost me a penny in lift tickets, I'm not battling chairlifts or long drives, or bending over endlessly and waiting for my back to pop. Nope. I didn't have to do anything at all. Just relax and enjoy the moment. Meanwhile my two kids were developing and practicing myriad ski skills and having oodles of fun.

I'm kind of embarrassed to admit all this happened by accident. When my brother and I were little, we did the exact same thing, endlessly, all winter long, and we loved it. But somehow, over time, I'd forgotten. There's no snow outside my Southern California door. Not ever.

Seeing my kids yesterday reminded me you don't always need a mountain. Just a playful spirit—and a little bit of snow.

Put my little guys on XC in big bear before they turned 4. Ditto on the embarrassment-wife's idea. I, of course, had more lofty notions. Of to summit in the am, my boy's staying home with his 4 week old (but maybe his wife will give the nod). Enjoy!