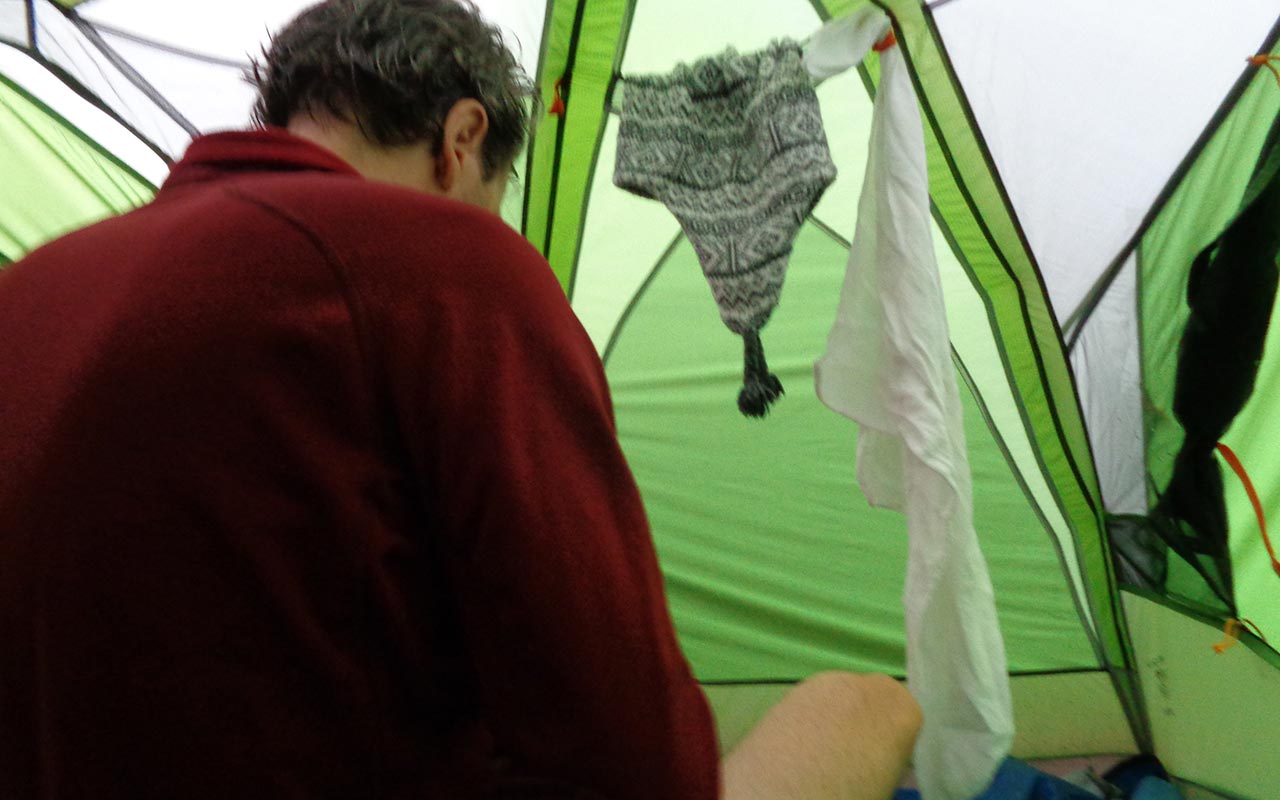 Those of you who read about my rim-to-rim day hike a few years back may recall me mentioning the 1978 overnight I did with my parents to Cottonwood Camp, from the North Rim.

On that infamous hike, my parents decided to eschew bringing a tent, because Arizona's summer monsoon was over, and they assumed the chance of rain was minimal. It poured, of course. That night ranks among my most vivid memories, including trying to rig a space blanket as an emergency shelter between two trees in a downpour.

Which (soon) proved to be in the direct path of a wash.

Last week I returned to Cottonwood Camp, with my eight-year-old son, as the third night of a classic rim-to-rim hike, and the big question in my mind was, would history repeat itself? We enjoyed two nights of stellar weather at Phantom Ranch—unseasonably cool, and just enough cloud cover to take the edge off the sun.

And then came day three. It began with a pipeline burst, just north of the slot canyon known as The Box. That pipeline feeds the entire Grand Canyon water system. The park service shut down the water just as we arrived at a billowing geyser spouting up through the trail. The geyser vanished, and so did our water source.

Theoretically you're supposed to carry water treatment means when you hike the corridor trails, but we never did. We took for granted that the system would be up and running. We also assumed rangers would be quick to respond to a break in such a crucial piece of Canyon infrastructure, upon which so many depend.

I was obviously worried about water. I'd timed our reserves to get us to Cottonwood Camp, expecting to replenish there. But I also couldn't help noticing that the sky was clearly holding a lot more moisture. Dark clouds were brewing over the South Rim.

Finding no running water at Cottonwood and no ranger presence either, we went begging for help and got a few ancient iodine tablets plus a Steripen from helpful neighbors. I quickly setup my tent, then took the Steripen and headed for the nearby creek to start processing liter bottles.

It started raining shortly thereafter. I cursed myself for not zipping up my tent's fly, but we needed water, so I stayed at the creek and kept stirring the Steripen. The rain soon escalated to a downpour, soaking me through. Lighting flashed overhead repeatedly. I kept stirring.

Eventually things got so wet the Steripen wouldn't reset itself, because the sensors were soaked. But I managed to get maybe five liters of water out of it, which I figured was enough, plus boiling water with my stove, to get us through the night.

I returned to camp to find my brother zipping up my tent fly, and my son standing in soaking clothes outside the tent, next to my now water-filled hiking boots.

I checked the inside of the tent and found water, though not as much as it could have been. Our camp pillows absorbed the brunt of the rain; our sleeping bags were still safe in their stuff sacks. I wiped up the loose water as best I could, then grabbed my son and took him to the nearby camp information sign, which had a small roof with an awning overhead.

When the rain lulled, I went back to my tent, grabbed dry clothes and our shells, and returned to the sign/roof/awning. I pulled off my son's wet clothes, dried him off with these cool cloth diapers I use now for camp towels, and put dry clothes and a jacket on him. Then I did the same for myself.

The whole time, of course, I was thinking of that trip with my parents, and musing about the incredible irony that not only had Cottonwood soaked us once again, this time it simultaneously gave us too much and too little water. The Universe does indeed have a sense of humor.

Our backup clothes were dry because I always keep those inside an ultralight sil-nylon stuff sack, whether inside my pack or inside the tent. That's a practice I recommend for you as well, regardless of where you are or what the forecast calls for.

We hung up our damp stuff inside the tent, hoping it would dry a bit. The soaked stuff stayed outside—there was nothing to be done with it. It continued pouring through the night, though mercifully my tent kept the water off us through morning. My boots were completely soaked, so I hiked out the next day in my Tevas.

It was a great trip—don't let my water grousing fool you. Doing this hike with my son was an overwhelming experience, priceless in each and every moment. I told him, as he shivered beneath the awning of the camp information sign, "Now you, too, will never forget Cottonwood Camp!"

He'll appreciate that more when he gets older, I think.

Hah. That's an awesome story, Andy. Thanks for sharing. I definitely have my fair share of rainy camping stories, including a ridiculously wet Scout camping weekend at Bluejay off Ortega Highway. Our crappy little dome tents with built in flies were no match for the furious skies. I think it was more the lack of sealed bathtub floor that had me wake up shivering in a puddle. As I recall, I crawled into my dad's tent and slept under a dry blanket. Somewhere around age 12-14. May have been fall of 97, given how furious the rain was for Southern CA.

So Labor Day 1971 friend Jeff (now Godfather to my son) and I headed west from Onion Valley for 5 days of Sierra grandeur, in the rain. Nice steady rain, never ending rain, can't wait it out under a conveniently angled boulder rain, a cold unless your hiking rain. Not bad at 9300' with our (now vintage) 70's gear kept dry by our secret weapon-Ponchos! Fine rain gear in light winds, not so much in 40 mph gales at the near freezing temps of Kearsarge pass. Damage done we arrive at the forest service summer shelter below the pass (still there??). 2 dripping wet 20 year olds were left freezing and pondering life's great mysteries, like how are we going to get out of this one? And no I don't recall getting the memo about blue jeans' remarkable ability to absorb water rendering their insulation value to negative numbers. I thought there's no way out of this one, bodies will be recovered next summer. So sad, 2 adventurous young guys in the prime of life.
Since you have no doubt deduced I survived and since the statute of limitations has passed I will confess our secret to survival. Jeff started prowling around and found the tip of a canvas tarp protruding from a soon-to-be unlocked storage box, we found some 2x4s,and covered over the 4' high walls of the maybe 12'x 12' structure and created a make shift shelter. Feeling encouraged by progress and Jeff's fine example we continued shelter improvements ala Bob Vila. Even managed to have a couple boards hang out as outriggers to put a trashcan lid (AKA "roof")on so as to shelter the inverted metal wash tub/fire place (complete with rock lining) immediately below. Managed to find enough tinder to start a fire on said tub and voile! Heat actually transferred into the shack, beyond out wildest hopes, drying it out. Nothing to this backpacking stuff! Well except that our altitude impaired, hypodermic 20 year old brains failed to realize that a tarp laced over spaced 2x4s tends to accumulate water in ever increasing depths augmented by ever increasing weight. You no doubt can see the inevitable cartoon mousetrap in our near future. But God, at last, took pity on us and turned off the clouds before total collapse-to which we were blessedly ignorant of at the time. However, just for laughs, the occasional "drip-drip-drip-crap" could be heard as an errant drop hit its mark on any exposed skin. Thankfully the rain stopped later that night and after a while no more drips! We got this! Dawn revealed why we were spared. The low spots in the tarp had frozen into solid non-expanding ponds in the frigid aftermath of the early September storm. We survived, a little wiser. It was that experience that informed me that no matter what life throws at you there is always something you can do, some way to dig deep, one more action to make it-a powerful life lesson hammered home by a brutal night in a sacred place.
Thanks for a great story, painful/eventually-to-be hilarious mishaps, some good tips, and sharing the adventure.

Oh yeah, did I mention we didn't bring a tent? We want stars over our heads at, just cover up with a tarp, and a down bag. Didn't get that memo either, something about down loft and water. Yep, turns out 20 year old brains don't work so well when warm and dry either.

I'll tell you, when I got back to camp and saw my tent still open, my son soaked, and my boots full of water, I had this initial moment of pure desperation. It was still pouring, and I was soaked, and so was everything else. Thinking about that little roof awning, and drying out there, as opposed to trying to climb directly into the tent, was a key moment.

We were able to dry ourselves, and warm up, without further compromising the tent, and eventually when we did get in the tent, it was reasonably dry, and we slept great that night.

Rain can sure cause problems when it catches you at a vulnerable moment. If it had come an hour later, it would have been no big deal. :)

Suffering is the seasoning of memory. Ride that dragon straight through the gates of hell.