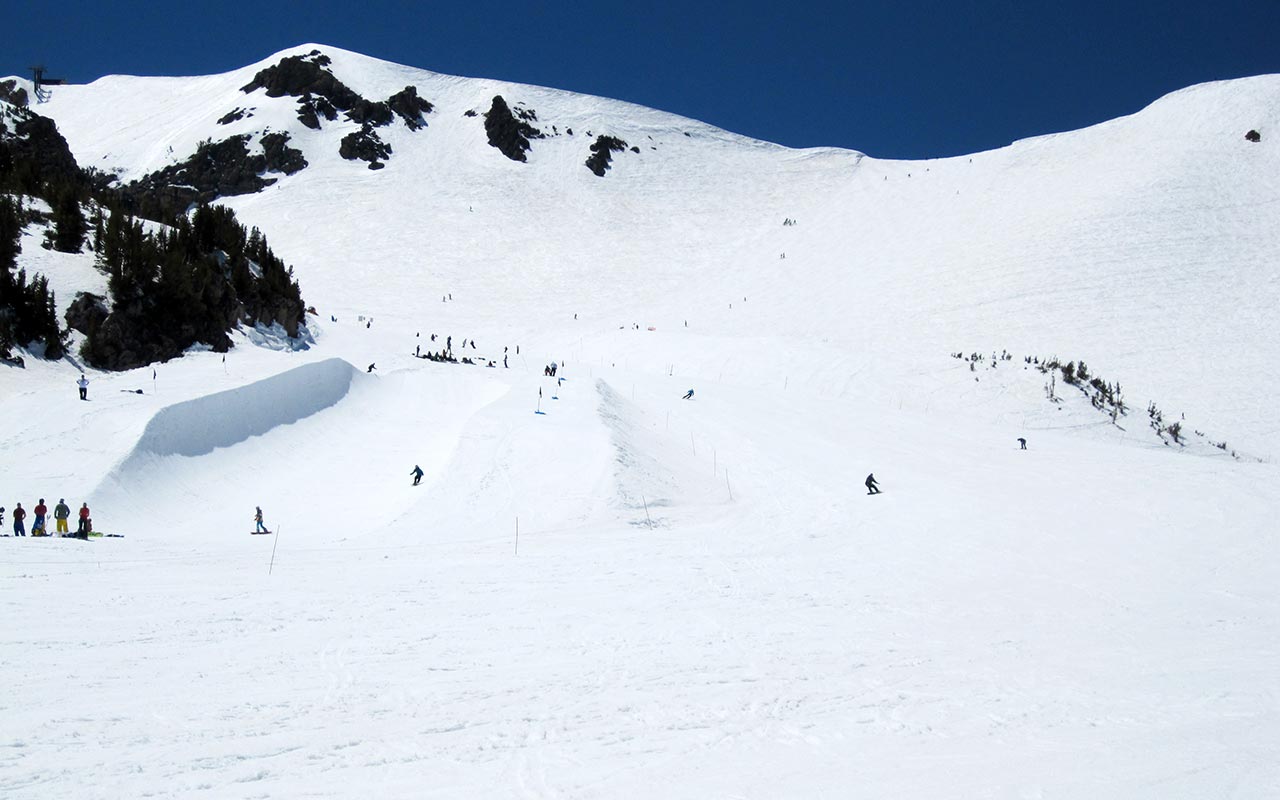 Going through old photos here, and this shot of Hangman's Hollow at Mammoth Mountain just floors me. This photo was taken June 12, 2011, and that entire cliff band along the crater rim is basically unrecognizable compared to this year. You'd think, looking at Hangman's this season, you were at a completely different mountain.

What I'm not doing on this Easter Sunday is skiing locally with my kids, which had become a new tradition for us, sadly halted this year by the fact that every SoCal ski resort is closed for the season. Not one of them managed to crack April this year. So, why not look at some old photos of a happy winter past?

If you missed it, do check out Howie Schwartz's sublimation, an online version of his slide presentation on skiing the Sierra's Black Divide over Easter 2011 with Glen Plake. Howie and Plake were only a few miles and a few hours away from Split Mountain when Kip Garre and Alison Kreutzen were killed by an Avalanche in the central couloir.

"Sublimation", which includes extensive reflections on heuristics, is dedicated in their memory.

As for the present, Mammoth may not look like this photo any more, but conditions are still ripe for spring skiing, both inbounds and out. That old troublemaker Howard Sheckter says two feet of snow may be on the way for Mammoth Lakes at April's end, and this year especially, every little bit counts—so keep your fingers crossed. Happy Easter!

That's depressing! I climbed and snowboarded down Shasta's Avy Gulch last weekend, and conditions were excellent. I was able to ride from the summit block all the way to the car at Bunny Flats. However, I imagine skiing season up there will end much earlier than most years, so get it while it's good!

But boo in 86-87 with 195" , and 2X boo to 76-77 with 94". Then again I skied mid winter boot deep in mid May 98 competing for tracks with 2 other guys, one of which was my son, on the entire upper mountain. So here's to a good 2 week storm cycle as penance for a crap early season (well except for the tasty 7' feet I got at KWood for vacay)! And BTW some are predicting the return of el nino next year perhaps rivaling 97-98. That was the year Snow Summit had to, Mammoth style, cut snow down to find dirt for May's mountain bike opener. Actually closed the ski season for a lack of snow riders. Maybe this is just mother natures' way of telling us who's the boss and to be fricken grateful?

^^^ Latest from the CPC is 65%+ probability of El Nino developing. Klaus Wolter (who is THE guy when it comes to ENSO science) is saying it's likely to be moderate-to-strong, with some data reading in the neighborhood of the same time prior to the big 97-98 event.

I graduated from Bishop High School in 1995. That year was its longest season ever. They opened October 8, 1994 and did not close until August 13, 1995. I would really love to have another season like that one. Ma nature, how about next year?