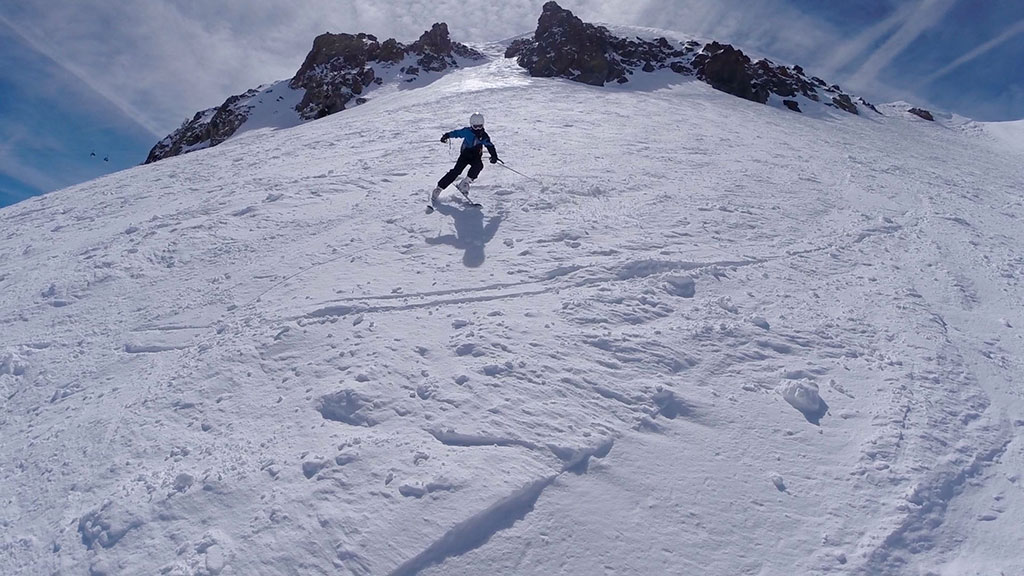 Back from Spring Break at Mammoth Mountain and trying to catch up on the usual backlog of things I'm supposed to be doing. Let's start by talking about Eastern Sierra backcountry conditions, south edition: things are looking thin. Very, very thin.

By officially-measured snowpack I know we're hovering around normal for this time of year, but don't be fooled by those measurements for one minute: this is a thin year, particularly if you count snowpack at lower elevations, even more so as you go south.

At Mammoth Lakes snowpack is basically nonexistent below about 8000 feet. Heading south past Big Pine, the Eastside looks pretty dire: some good high-altitude snowfields, yes, but even these are wind-stripped and erratic.

Staying at the Mammoth Mountain Inn, I spent a lot of time looking over the many vintage photos of the Mammoth area. Wow, has winter changed over the past fifty years. You see the same story looking at old photos of the High Sierra and Owens Valley at the Laws Museum.

I would argue over even the past ten years we've basically seen the level of persistent snowpack rise two to three thousand feet higher in southern and central California—a huge step increase. This is especially evident looking at Birch Mountain, or the White Mountains, both of which seem practically unable to hold snow these days.

Not one but two pairs of boots arrived this past week, both Scarpa: the (2017) F1, which eschews the tronic mechanism in its North American edition, and the updated Maestrale, which is currently available. When I think about the Maestrale, I think about all the spectacular and huge Sierra tours I did on that boot.

The new Maestrale adds a touch of extra stiffness plus some incremental improvements, and remains a ski mountaineering standout. The new F1 drops over a pound per pair on the Maestrale while keeping much of that boot's climbing and skiing chops, admittedly sans instep buckle. Watch for full reviews of both sometime in April.

Meanwhile at Mammoth I continued to be delighted skiing with my kids (a few overzealous lift attendants notwithstanding), and I continued puzzling over Anselme Baud's steep skiing technique.

Possibly I've come up with a bit of a breakthrough in that regard, though we've seen that picture before. Let me try to break the turn the next time I'm up north. If I can't, then I will be happy to proclaim I've once and for all decoded the uphill-weighted pedal turn, and why I (and some but not all skiers) seem to have so much trouble trying to replicate it.

If for some reason you're not already aware of it, I do have one rockin' YouTube channel available for your enjoyment, and there is also my twitter account, but that increasingly seems like a dying platform to me. That is all...

would like to ask you some questions about San Jacinto skiing...

The climate is changing. Snow levels have risen in my lifetime. Old timers in Bishop recall ice skating the pond in the city park. No body would ever do that now.

I lived in Mammoth Lakes in the late 70s early 80s. We used to cross country ski in the hills around Hot Creek. When was the last time that was possible?