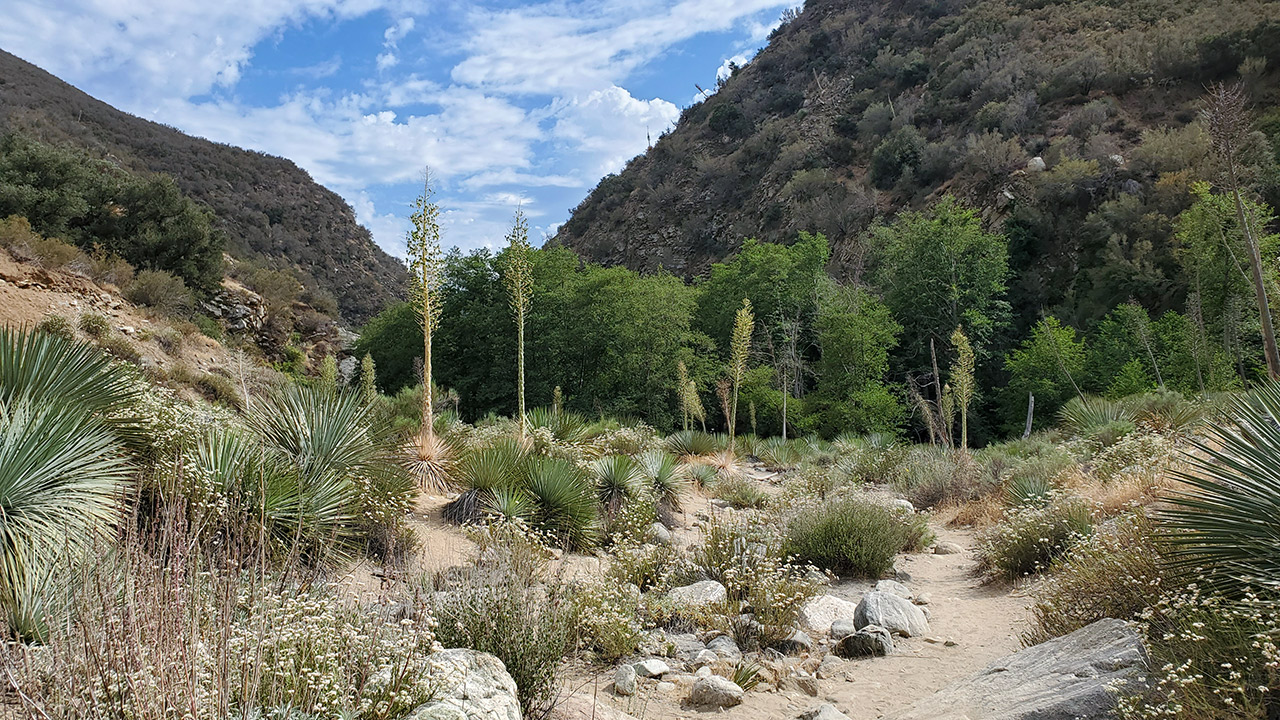 We hiked up the east fork of San Gabriel Canyon today, en route to that most enigmatic of SoCal landmarks, the Bridge to Nowhere. It was hot. Cloud cover helped, but it was still approaching 90°.

That plus the 5-point-something miles in (and several scrambles where the old trail had washed out) made for a longer haul than I was expecting. I was here last way back in 2010, right after skiing Iron Mountain's north couloir (which we called the Couloir to Nowhere in honor of the nearby bridge). I think I must have been a little peppier then. I certainly had more hair.

They tried to build a road through this canyon.

Given the extent of the flood damage, the road project (connecting Azusa and Wrightwood) was abandoned. Apparently they made a half-hearted second try on the opposite side of the drainage but gave that up, too.

If you go, be advised that there seems to be less trail than there used to be. A stretch of the trail around the halfway point has been obliterated by landslides. This led us, twice, to climb up expecting the trail to continue, only to face difficult scrambles back down to the riverbed.

Some helpful soul has spray-painted red arrows along the trail, though unfortunately these are mostly visible only on the descent, not heading up the canyon, where they would be most useful.

It's an odd area. Strikingly, desperately remote and beautiful. Yet also strangely defaced with trash (especially along the east fork road) and, yes, spray paint, particularly as you get closer to the parking lot.

In contrast to my trip eleven years ago, the bridge today has acquired a new set of wire railings and even more signs warning you not to be stupid. I guess this is one of those places where people get killed. Other than the (potentially) swift-moving river, the crumbling cliffs, the paranoid gold-panners, and the bridge itself, I don't think there's much to worry about.

The Bridge marks the beginning of the section of the canyon known as 'the narrows'. I can't imagine what this area would look and sound like with the river in flood. Absolutely terrifying is my guess.

I've long wanted to explore farther up the canyon, but I've always turned back at the Bridge. Is there a use trail past the bridge? How far could you get, if you were crazy enough? I know one group climbed Iron's north couloir from the river, and apparently some people have climbed Iron's north ridge because they just love to suffer.

Should you have off-trail aspirations here, the ruggedness of the terrain is just impossible to overstate. There's also poison oak, because of course there is. Dip your toes in the water, hike to the bridge, and marvel at the beauty-and-the-beast nature of the San Gabriels. Preferably when it's not so hot.

Great trip report. Wonder if CALTRANS will ever finish the road …