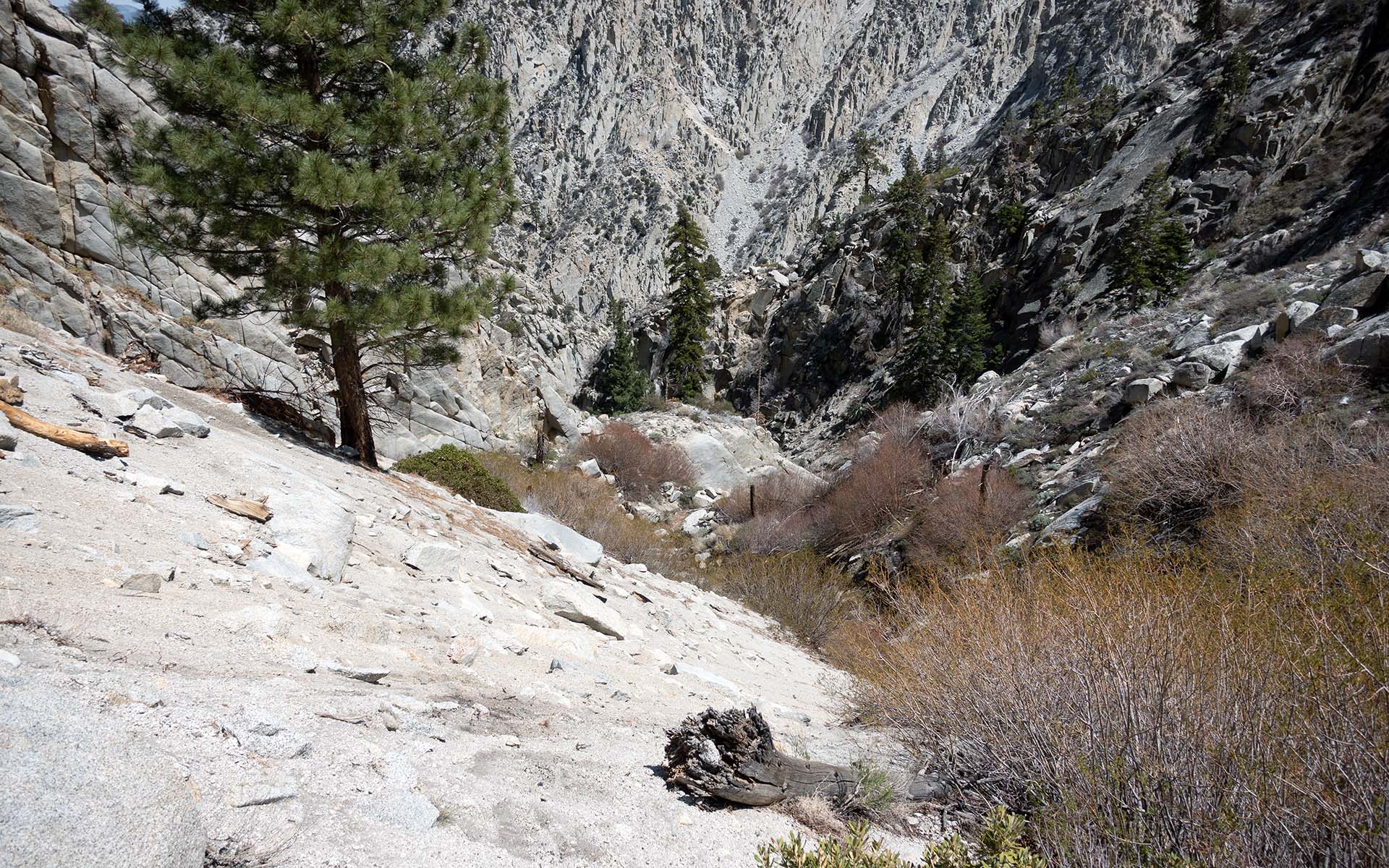 I wanted to see if I could reach the snow. In the eastern Sierra there is a tradition of long, heroic epics in which skiers carry skis up desperately remote drainages in hopes of reaching snow.

And often, even in those rare instances when skiers do successfully reach snow, they are so utterly spent they simply turn around and go home—not a single turn taken. Beaten, yes, but also imbued—perhaps—with some small measure of grace.

What was my plan to avoid such a fate? I decided to leave my skis at home. That's right: crafty me planned to cheat the mountains by denying them the ability to deny me my plan to ski them.

The logic was flawless. So I left my skis at home and headed north up the 395, wanting to see if I could reach the snow in the tantalizing cirque hidden high above the Division Creek drainage.

I'd seen a glimpse of it driving home from Mammoth—another White Whale to add to the list. A series of subsequent searches yielded an alarming zero results on hiking, climbing, or skiing the drainage. As far as Google was concerned, the place didn't exist.

The PSA part of this post is that the Division Creek drainage is truly a 'you ought not to be here' kind of place. It is as steep, loose, and rotten as any eastside drainage I've encountered. I find myself thinking the Bairs approach looks attractive in comparison.

This is some of the least stable ground I've ever encountered. Huge talus blocks perched on powdery granitic sand constantly being undercut by the fast waters of Division Creek. The whole thing is in continuous motion, and it's no wonder there's no trail here: if you built one, it would soon be gone, Bridge to Nowhere-style.

Inadvertently and not, I put blocks of talus in motion that were shocking in their size and violence. One went careening into a stand of willows and shattered a mature trunk like it was packed with explosives.

The rock everywhere was loose, crumbling, rotten. And steep. Class 4 steep. I repeatedly found myself performing moves—even over seemingly-ordinary ground—that were far too consequential for comfort.

And the brush...the brush was horrible. The vegetation has changed, it seems to me. It is drier (and thus more likely to stab, scrape, or gouge you), and it is also populated with a host of thorny species I didn't recognize. The manzanita, in comparison, seemed like an old friend.

In shorts and low socks, I got cut to pieces.

There's a part of me, faced with adversity, that really hates to lose. I pushed onward in a way that probably wasn't smart, even when the drainage pinched, even when it became obvious that turning back was the smart thing to do. And when I got above one particularly nasty waterfalls-and-cliffs section, it occurred to me that I really, really didn't want to have to downclimb it.

So I hatched a scheme to go up and over to neighboring Armstrong Canyon, to the north, returning to my car via an entirely new drainage. By doing that, I hoped I could avoid the danger below. And for a while, despite my sore body and spent legs, the idea of an escape to the north motivated me to keep pushing upward.

Time passed. The shadows began to lengthen. I was starting to get cold. I was exhausted. My legs were shaking. It was getting late. And my little voice started talking.

I hoped I was around 10K feet, but I knew Armstrong Col (the passageway to the neighboring drainage) was at least 11,500', and I didn't know where it was. If I did get there, I didn't know what I'd find on the north aspect of Armstrong Canyon—snow? ice?—and I pictured myself atop an unknown ridge, in the dark, trapped at high altitude in thin clothes with ice and cliffs below me.

I felt an immense pressure to speed up, to race upward, to try to get ahead of the coming sunset. I noticed that feeling—that urge to flee—and noticing it seemed to take some of the power out of it.

Instead of rushing blindly upward, I decided to slow down. I wasn't committed to anything yet, I told myself. I had time to think things over. I stopped, and I sat down on a rock.

Going down seemed impossible. I was already scratched to pieces, and I literally couldn't bear the thought of trying to navigate back down through the thorns and brush and scree. It would skin me alive.

But I also felt I couldn't keep going upward. I didn't know the route. I would be navigating it, at best, late into the night, completely sight unseen. It was an utterly unacceptable option.

But what else could I do? Sit and shiver and wait for dawn and SAR to find me?

And then I realized I had a fleece jacket and a knife in my pack. An idea came to me. I cut the sleeves off my jacket and fashioned two leggies for myself, which covered my legs to the knees, providing crucial protection from the brush. It wasn't perfect, but I knew it would make a huge difference in the level of pain (and damage) I'd be facing.

As I sat there, I realized going up was just spinning the Wheel of Fortune and hoping for some magical solution to materialize—a literal shot in the dark. Going down, in contrast, was putting things in the hands of my skills. I could go as slow as I needed. I could use everything I'd learned over years of Sierra wandering to get home safely.

I liked that idea. I liked putting my hands on the steering wheel rather than just rolling the dice. So I drank my water and I ate a snack and then I started climbing down.

Down was hard, as it often is. I skittered about on talus and scree, shoes filled with gravel. I did my best to pass around the cliffs. I avoided the waterfalls. I pushed through wooded and brush-choked sections so thick my feet never touched the ground. I used vegetation for belays, for rappels; I talked to it. I sang to it. I cursed at it. I beat it with a stick.

And I kept going.

I got a text through to my wife telling her I'd be late, and that helped reduce my urge to hurry. The difficulties of the ascent, with the hindsight of knowing which way to go, seemed to ease a bit on the down, even if the loose rock and ground remained every bit as unstable.

I stood there for a while, looking back up the drainage, tired and grateful to be safe. Carry skis up that? Not likely. But I did make it to the snow, topping out around 9200'. A small measure of victory.

I love these lesser-known canyons and drainages... why try to hike up them? Well, why not?

I sure do enjoy seeking out (and writing about) days like this. But we both know life's hardest adventures don't happen in the mountains. Thinking about you Brad! Much more Devilish Drano days to come, I promise...

We love hearing about it and cringe with every loose foot step, with every “sure be nice to have a rope here”, and every “Crap, no cell reception, wife’s gonna send out SARS (again)” moments on adventure like this. It’s been quite a year for those types of missions!

Back in the real world I’m already in week 4(of 8) for radiation and surprisingly still able to hit local trails though the energy levels are definitely off though pace remains within reach for this time of the year’s training. Side effects are a bit rough but so far manageable though a bit withering. Hoping for (slow) local high country effort by end of June then build from there. Appreciate the kind thoughts and back at you.

Brad, you are showing us what your made of: nails. Wishing you speediest and fullest of recoveries. Andy, you're made of nails too!