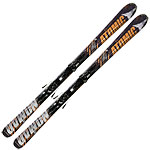 Atomic’s Smoke Ti is a frontside carver that makes shop owners and skiers happy alike—it sells well, and it delivers a lot of ski for the money. Probably Atomic wouldn’t exactly push this as an economy-class ski, but you can’t help noticing that the Smoke Ti trades at a noticeable discount compared to everything else END_OF_DOCUMENT_TOKEN_TO_BE_REPLACED ... 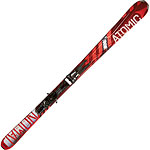 With its blazing red graphics and its innovative ‘adaptive’ camber, Atomic’s Crimson Ti ski was poised to become the go-to All-Mountain plank in my ski quiver…and then I tried it. The Crimson Ti has made favorable impressions across the review circuit, scoring points for its fusion of huge edge grip with the sort of lift/flotation END_OF_DOCUMENT_TOKEN_TO_BE_REPLACED ...