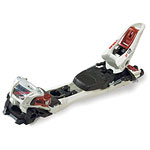 Visions of an Alpine Touring binding from a heavyweight Alpine manufacturer like Marker have been dancing in the dreams of A/T skiers for many years now—mine included. Those dreams seemed to come true with the 2008 release of Marker’s touring-capable Duke, but spontaneous performances of the Hallelujah Chorus proved a little premature (more…) END_OF_DOCUMENT_TOKEN_TO_BE_REPLACED ...