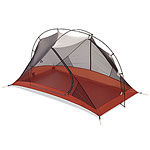 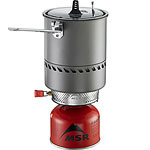 Probably the most critical comment I can make about MSR’s Reactor backpacking stove is that it sat unused and unopened inside my closet for nearly two years. Winner of a 2007 Backpacking Magazine Editor’s Choice Award, the patented Reactor is an integrated canister stove that employs both a heat exchanger and a pressure regulator to END_OF_DOCUMENT_TOKEN_TO_BE_REPLACED ... 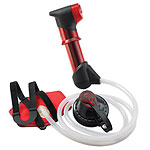 With its various parts and configurations, MSR’s Hyperflow Microfilter weighs between roughly 7.6 and 9.9 ounces total. Go with the higher number—leaving parts at home (such as the Nalgene bottle adapter or even the carrying sack) is not recommended. That makes the Hyperflow roughly two and a half ounces lighter than my current pump/filter darling END_OF_DOCUMENT_TOKEN_TO_BE_REPLACED ...