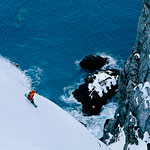 If you ask me, brothers Noah and Jonah Howell, a.k.a. the Powderwhores, appear to be in the midst of a transition phase. ‘Choose Your Adventure’ is their latest film, and in it they continue to demonstrate how accomplished they’ve become at shooting skiing. Year after year, the whores take their camera and their Mac and END_OF_DOCUMENT_TOKEN_TO_BE_REPLACED ...

Okay, I admit it: the prospect of spending an hour watching a crew of Telemarkers dropping their knees did not exactly fill my heart with glee. Skiing is a big tent, I understand, with plenty of room for people doing things any which way they choose, but as I inserted Television into my DVD player END_OF_DOCUMENT_TOKEN_TO_BE_REPLACED ...