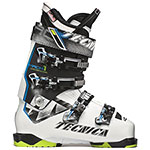 New for the upcoming 2014-2015 season is Tecnica’s Mach1, which employs what Tecnica calls a paradigm shift in ski boot construction: designing “from the inside out.” By this, Tecnica means they’ve built the liner to fit the foot, and then built the shell to fit the liner, instead of the reverse. Don’t other boot makers END_OF_DOCUMENT_TOKEN_TO_BE_REPLACED ... 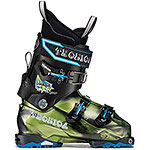 Yes, those are indeed tech fittings you see at the heel and toe of Tecnica’s new Cochise Pro Light ski boot, and believe me, they’re not just for decoration. The Cochise Pro Light joins a host of new touring-oriented ski boots from Alpine makers who are now testing the A/T waters. Where their peers have END_OF_DOCUMENT_TOKEN_TO_BE_REPLACED ...